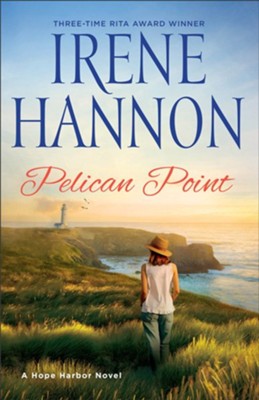 How important can one old lighthouse be? Ex-Army surgeon Major Ben Garrison thinks it’s an eyesore, a burden he’s inherited and can’t wait to trade off. But Marci Weber, editor of the Hope Harbor Herald, holds a very different view. To her, Pelican Point is a landmark that must be saved. It’s a clash of heads – and hearts – as the fate of the lighthouse hangs in the balance.

▼▲
A crumbling lighthouse is not part of the inheritance Army doctor Ben Garrison expects to claim when he journeys to Hope Harbor. Fresh out of the service, he wants only to unload the tower of bricks, decompress from years of treating battlefield trauma, and prepare to launch his civilian career.

Hope Harbor Herald editor Marci Weber has other ideas. She may not be a Hope Harbor native, but the small Oregon seaside town has become home--and she's determined to save the Pelican Point landmark.

Sparks fly as the two go head to head over the fate of the lighthouse. But when they start to cooperate, a different kind of fire ignites. And as they work together, might Hope Harbor heal the hearts of these two romance-wary souls?

Bestselling author Irene Hannon invites readers back to their favorite town for a story that will light a beacon of hope within their hearts.

▼▲
Irene Hannon is the bestselling author of more than fifty novels, including One Perfect Spring, Hope Harbor, Sea Rose Lane, and Sandpiper Cove, as well as Dangerous Illusions and the Private Justice and Men of Valor suspense series. Her books have been honored with three coveted RITA Awards from Romance Writers of America, and she is a member of that organization's elite Hall of Fame. Her many other awards include a National Readers' Choice Award, a Daphne du Maurier Award, a Retailers' Choice Award, two Booksellers' Best Awards, two Carol Awards, and two Reviewers' Choice Awards from RT Book Reviews magazine, which also honored her with a Career Achievement award for her entire body of work. In addition, she is a two-time Christy Award finalist. Learn more at www.irenehannon.com.

▼▲
I'm the author/artist and I want to review Pelican Point, Hope Harbor Series #4.
Back