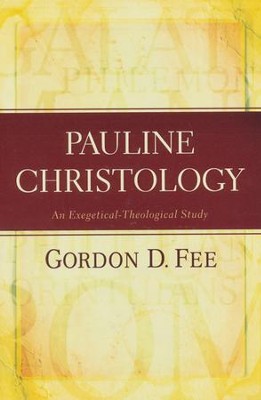 ▼▲
Fee's classic study Pauline Christology offers an exhaustive study of the great apostle's thought on Jesus Christ. He provides a exegetical commentary-biblical theology style examination of the relevant texts within the Pauline corpus and then synthesizing them into a coherent picture. What emerges is one of the most thorough and well-written articulations of Paul's Christology. In doing so Fee cover the following major themes:

▼▲
This work offers an exhaustive study of Pauline Christology by noted Pauline scholar Gordon Fee. The author provides a detailed analysis of the letters of Paul (including those whose authorship is questioned) individually, exploring the Christology of each one, and then attempts a synthesis of the exegetical work into a biblical Christology of Paul.

The author's synthesis covers the following themes: Christ's roles as divine Savior and as preexistent and incarnate Savior; Jesus as the Second Adam, the Jewish Messiah, and Son of God; and as the Messiah and exalted Lord. Fee also explores the relationship between Christ and the Spirit and considers the Person and role of the Spirit in Paul's thought. Appendices cover the theme of Christ and Personified Wisdom, and Paul's use of Kurios (Lord) in citations and echoes of the Septuagint.

"Anyone who has read even a smattering of Paul's writings recognizes early on that his devotion to Christ was the foremost reality and passion of his life. What he said in one of his later letters serves as a kind of motto for his entire Christian life: 'For me to live is Christ; to die is [to] gain [Christ]' (Phil. 1:21). Christ is the beginning and goal of everything for Paul, and thus is the single great reality along the way."--From the Introduction

▼▲
Gordon D. Fee (PhD, University of Southern California) is professor emeritus of New Testament studies at Regent College in Vancouver, British Columbia. He is the author of numerous works, including New Testament Exegesis, Listening to the Spirit in the Text, and commentaries on Revelation; Philippians; and 1 and 2 Timothy, Titus. He also coauthored How to Read the Bible for All Its Worth.

▼▲
I'm the author/artist and I want to review Pauline Christology: An Exegetical-Theological Study.
Back
×
Back
×