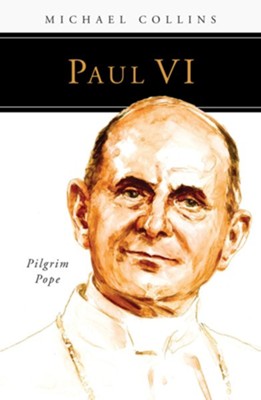 By: Michael Collins
More in People of God Series
Liturgical Press / 2017 / Paperback
Write a Review
In Stock
Stock No: WW646694

Pope Paul VI (1963-78) was one of the most important and influential pontiffs of the twentieth century. After serving thirty-four years in the Roman Curia and eight as archbishop of Milan, he was elected to succeed the enormously popular John XXIII in 1963. In this engaging biography, Michael Collins examines this deeply spiritual man who is remembered as a reformer, evangelizer, unifier, and the very first pilgrim pope.

Pope Paul VI began his papacy with a series of international journeys, the first of such a scale undertaken by any pontiff before him. These brought him face-to-face with modern life throughout the globe and the challenge of making the Christian message relevant in a secular world. Paul VI is regarded for his efforts to reduce poverty in the developing world, improve educational and health standards, and foster better relations between Catholics and Orthodox and Reformed Christians. He was beatified in 2014 by Pope Francis.

▼▲
Michael Collins is a priest of the Archdiocese of Dublin, where he has served several parishes. He has written or co-authored a number of books, including Benedict XVI: Successor to Peter, John Paul II: The Path to Sainthood, and The Story of Christianity. He is the author of Francis: Bishop of Rome, published by Liturgical Press and now in its second edition.

People of God is a series of inspiring biographies for the general reader. Each volume offers a compelling and honest narrative of the life of an important twentieth or twenty-first century Catholic. Some living and some now deceased, each of these women and men has known challenges and weaknesses familiar to most of us but responded to them in ways that call us to our own forms of heroism. Each offers a credible and concrete witness of faith, hope, and love to people of our own day.

▼▲
"This series is solidly researched and well-written. Liturgical Press has done the Church a great service.
Emmanuel

▼▲
I'm the author/artist and I want to review Paul VI: Pilgrim Pope.
Back
×