Paul and the Anatomy of Apostolic Authority (2007) [NTL]
By: John Howard Schutz 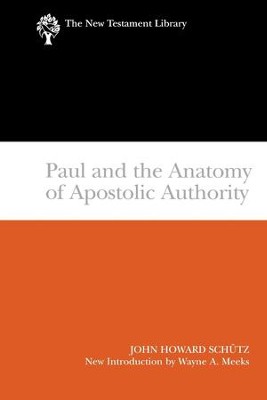 Paul and the Anatomy of Apostolic Authority (2007) [NTL]

▼▲
"I return to Schutz's work with pleasure: how sophisticated this was---and is. To put it bluntly, how much more careful and illuminating and persuasive it is than so much that has been written since then at the border between the social sciences and the study of ancient Christianity and its texts. . . . He pushes us to think along with him and with the texts he expounds, to pursue again the elusive rationale from which they spring. It is for this reason that I can invite a reader today to discover the treasures of this book appearing again after a third of a century. Not that it is an easy read: it is a scholarly monograph that makes no pretense of being popular. Yet its simple elegance, the directness and clarity of its arguments, touched by flashes of sardonic humor that every acquaintance of John Schutz will recognize, are immensely appealing."
-Wayne A. Meeks, from the new introduction

John Howard Schutz's milestone analysis of Paul's authority shaped a generation of scholars in how to think about Paul. First appearing in 1975, this volume has long been unavailable, but it stands as a significant voice that scholarship today needs to hear.

Wayne A. Meeks is Woolsey Professor Emeritus of Religious Studies at Yale University.

John Howard Schutz's milestone analysis of Paul's authority shaped a generation of thought about Paul. This insightful work continues to be relevant to Pauline scholarship.

The New Testament Library offers authoritative commentary on every book and major aspect of the New Testament, as well as classic volumes of scholarship. The commentaries in this series provide fresh translations based on the best available ancient manuscripts, offer critical portrayals of the historical world in which the books were created, pay careful attention to their literary design, and present a theologically perceptive exposition of the text.