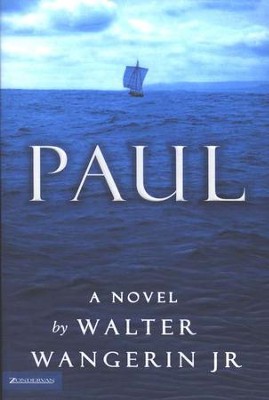 An intimate portrait of a complex individual through whom God was at work, turning the world upside down. With vivid imagination and scholarly depth, award-winning author Walter Wangerin Jr. weaves together the history of the early church with the life story of its greatest apostle--Paul. Wangerin begins to unfold Paul’s incredible life by imagining the childhood and early family life of a boy then called "Saul." A fierce prosecutor of Christians before his conversion, Paul never lost his fiery dedication, boldness, and strong personality. After his shocking encounter with God on the road to Damascus, he applied his formidable strengths to spreading the gospel. Wangerin deftly reveals Paul’s character through each stage of his life, and enables us to see Paul the person, living and complex, viewed through the eyes of his contemporaries: Barnabas, James, Prisca, Seneca, and Luke. Paul’s rich interaction and brilliant dialogue with friends and foes, leaders and slaves, Jews and Greeks, creates a swift and intense historical drama around the man who spread the seed of the Gospel to the ends of the known world.

Walter Wangerin Jr. is widely recognized as one of the most gifted writers writing today on the issues of faith and spirituality. Known for his bestselling The Book of the Dun Cow, Wangerin’s writing voice is immediately recognizable, and his fans number in the millions. The author of over forty books including The Book of God, Wangerin has won the National Book Award and the New York Times Best Children’s Book of the Year Award. He lives in Valparaiso, Indiana, where he is Senior Research Professor at Valparaiso University.

▼▲
In 1998, Wangerin wrote the acclaimed The Book of God: The Bible as a Novel. Here he turns his attentions to the tireless apostle Paul. A devout Jew fluent in the scripture of the Torah, Paul actively persecutes the fledgling Christians until Jesus strikes him blind and opens his eyes to the new faith. Then Paul casts off the hatred that led to the stoning of Stephen years earlier and shares his joy in the Lord with a disbelieving world. As Paul's story unfolds from the viewpoints of the people around him the slight, bantam rooster figure takes on an ethereal happiness that draws followers to Jesus wherever he goes. Barnabas, Prisca, Timothy, Titus, Lydia, James, Simon Peter, Simeon Niger, and others share good and bad thoughts of Paul, adding layers to an already complex figure. Paul only speaks for himself in letters. At times humorous, at times appalling, Paul's voice reaches beyond the pages of fiction to exhort a fundamental love of Jesus. For all collections. Copyright 2000 Cahners Business Information.

▼▲
In his second Bible-based novel, Wangerin delivers an uneven but informative narrative portraying the Apostle Paul as a flawed, confrontational man who inspires either murderous hate or passionate love. Reminiscent of both Eugene Peterson's paraphrased New Testament and Robert Graves's dishy novels about the Roman emperors, this book borrows from the Bible and various other historical sources to chronicle the itinerant ministry of Paul from his preconversion persecution of Christians to his execution in Rome. Each chapter is narrated by a different character--generally one of Paul's close associates--and while this technique successfully brings biblical figures to life, it disrupts the narrative flow. The story is punctuated by epistolary fragments from the Bible-and perhaps most interesting but least connected to the rest of the text-Seneca's gossipy letters about Nero and political intrigues in Rome. To his credit, Wangerin breathes life into the women who are mentioned but never fleshed out in Paul's letters, particularly Prisca, and he takes pains to emphasize the multicultural, multiethnic composition of the first-century church. Nor does he downplay the hardships these groups encountered as they attempted to find common ground. In fact, the novel focuses almost too exclusively on Paul's attempts to reconcile Gentile and Jewish followers of Jesus. While overwrought dialogue about circumcision and Jewish food restrictions is often tedious, readers wishing insight into Paul, the New Testament church and the schisms that nearly destroyed it will be rewarded for their patience. (May) Copyright 2000 Cahners Business Information.

▼▲
I'm the author/artist and I want to review Paul, A Novel.
Back
Back