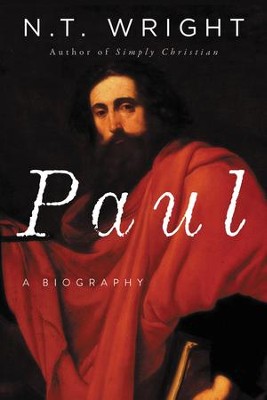 For centuries Paul has been one of the church's most widely cited saints due to his influence regarding the formation of Christian theology that has changed the world. However, in this compelling modern biography, N.T. Wright devotes his attention to the all too often overlooked essence of Paul’s life itself – specifically illuminating the human and intellectual drama that shaped him – and the unlikelihood of what he accomplished. Wright insists that without a proper understanding of Paul’s Jewish heritage, our understanding of Paul and his accomplishments are impaired. Paul: A Biography provides an accessible look at the man himself, allowing for greater clarity when it comes to Paul’s thoughts and writings, and enabling us to see the man and his theology in a fresh new light.

In this definitive biography, renowned Bible scholar, Anglican bishop, and bestselling author N. T. Wright offers a radical look at the apostle Paul, illuminating the humanity and remarkable achievements of this intellectual who invented Christian theology—transforming a faith and changing the world.

For centuries, Paul, the apostle who "saw the light on the Road to Damascus" and made a miraculous conversion from zealous Pharisee persecutor to devoted follower of Christ, has been one of the church’s most widely cited saints. While his influence on Christianity has been profound, N. T. Wright argues that Bible scholars and pastors have focused so much attention on Paul’s letters and theology that they have too often overlooked the essence of the man’s life and the extreme unlikelihood of what he achieved.

To Wright, "The problem is that Paul is central to any understanding of earliest Christianity, yet Paul was a Jew; for many generations Christians of all kinds have struggled to put this together." Wright contends that our knowledge of Paul and appreciation for his legacy cannot be complete without an understanding of his Jewish heritage. Giving us a thoughtful, in-depth exploration of the human and intellectual drama that shaped Paul, Wright provides greater clarity of the apostle’s writings, thoughts, and ideas and helps us see them in a fresh, innovative way.

Paul is a compelling modern biography that reveals the apostle’s greater role in Christian history—as an inventor of new paradigms for how we understand Jesus and what he accomplished—and celebrates his stature as one of the most effective and influential intellectuals in human history.

▼▲
“An enthralling journey into the mind of Paul by one of the great theologians of our time, a work full of insight, depth and generosity of understanding.”
“NT Wright takes the most controversial and influential author of scripture and does something remarkable: he humanizes Paul. I was hooked from the first page.”
“Nobody who preaches on Paul or ever interested in Paul’s life and message will want to miss this treatment of him by N.T. Wright. It sheds fresh light on Paul’s ministry, theology and personhood, and it does so in a gripping and readable way.”
“Wright draws from a lifetime of study to construct this useful biography. Accessible and engrossing . . . Wright looks to the realities of what Paul dealt with . . . anxieties, broken relationships, beatings, imprisonments [revealing] a very human Paul. . . . An excellent introduction.”
“C. S. Lewis spoke of three artistically construed figures who jump off the page—Plato’s Socrates, Boswell’s Johnson, and the evangelists’ Jesus.  I am tempted to add a fourth candidate, having encountered Tom Wright’s careful, tender, and bracing enfleshment of the apostle Paul!”
“As lucid as it is salient, this book is a must-read for all readers of the New Testament and all interpreters of early Christianity.”
“Walking a fine line between presenting a fresh perspective in Pauline theology and reworking the Pauline corpus according to his own biblical theology, Wright’s work, although intended for the informed layperson, will spark much debate among scholars and students.”
“One of Wright’s best books . . . Eloquent and moving.”
“A very deep dive into Paul. Professor Wright has such a gift in taking truth and presenting it [so] it just comes alive. I can’t say enough about it. I love the book”
“The great N.T. Wright [offers] this grand biography of Paul. An exciting book.”
“In his monumental, meticulously detailed and elegant study, Wright presents a fascinating portrait of a man who went from persecuting Christians to being their biggest advocate.”
“A fresh look at the Jewish heritage and the essential place in Christian history of the man converted on the road to Damascus.”
“A compelling, erudite, and readable biography of the most seminal Christian theologian by one of today’s most celebrated Paul interpreters.”
“Substantive yet accessible, Paul provides a 432-page exploration of the Apostle’s beginnings, his missionary journeys, his struggles and passion, and much more.”
“Compelling . . . a magnificent biography worthy of a wide readership.”
“The most winsome feature is the way Wright paints Paul as a . . . three-dimensional, many-sided, complicated human being. Paul: A Biography is a bright, provocative, imaginative, and often brilliant book.”
“Paul is a compelling modern biography that reveals the apostle’s greater role in Christian history—as an inventor of new paradigms for how we understand Jesus and what he accomplished—and celebrates his stature as one of the most effective and influential intellectuals in human history.”
“In eloquent and inviting prose, one of the world’s leading New Testament scholars retells the story behind the story, the story of the Apostle Paul. A master teacher here communicates Paul in language every reader can understand.”
“The life of one of Christianity’s founders is told by renowned biblical scholar N.T. Wright, who believes that in focusing on Paul’s letters and theology, scholars and pastors have not considered Paul as a person and in the context of his times.”
“Written with the usual Wright combination of erudition, intuition, mature wit, and wisdom, Paul should serve us well as we seek to unlock the keys to the first great Christian theologian.”
“Wright’s excellent book not only brings Paul to life but places that life in the complex and overlapping array of Jewish and non-Jewish communities, all set within the Roman empire.”
“Brings alive not only Paul but also the communities where he formed churches and the religious ideas swirling around them. . . . This highly readable volume gives those interested in biblical history something to argue about and plenty to ponder.”

▼▲
I'm the author/artist and I want to review Paul: A Biography.
Back
Back