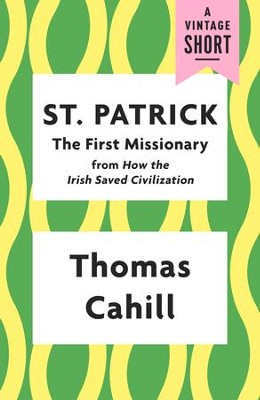 ▼▲
A selection from How The Irish Saved Civilization, everything you need to know about the historical St. Patrick, the extraordinary Iron Age man who became Ireland’s patron saint.

The real St. Patrick neither dressed in green nor chased the snakes from Ireland; instead, he was a kind and courageous former slave who had been stolen from Britain during childhood and brought to Ireland. Though he escaped from slavery, he later returned in triumph to the island of his captivity. From the first volume of his widely acclaimed "Hinges of History" series, Thomas Cahill brings St. Patrick to life, and sheds light on the chaotic but starkly beautiful ancient Ireland.

▼▲
Thomas Cahill’s appealing approach to distant history has won the attention of millions of readers in North America and beyond. Cahill is the author of five previous volumes in the Hinges of History series: How the Irish Saved Civilization, The Gifts of the Jews, Desire of the Everlasting Hills, Sailing the Wine-Dark Sea, and Mysteries of the Middle Ages. They have been bestsellers not only in the United States but also in countries ranging from Italy to Brazil. He is also the author of A Saint on Death Row.

▼▲
I'm the author/artist and I want to review St. Patrick: The First Missionary / Digital original - eBook.
Back
Back