Skip to main content
Get Christmas Ready Sale: Deals on over 1,150 titles thru 9/27.
Passport to the World: Your A to Z Guided Tour
By: Craig Froman
Stock No: WW515952 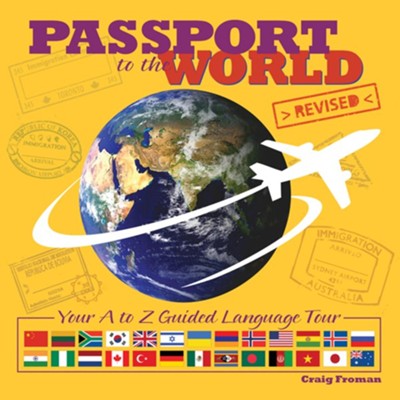 Passport to the World: Your A to Z Guided Tour

▼▲
Travel the world, and learn some common phrases along the way! Each country's two-page spread features the words for hello, goodbye, thank you, & peace, fast facts about the country, money images, a proverb, pictures of both modern & traditional dress, interesting facts, and a geographic picture. Twenty-six languages are covered, including Armenian, French, English, Cherokee, Dutch, Turkish, Hebrew, Yoruba, Oriya, Zulu, Mandarin, Ukrainian, and more. Written from a Christian perspective, the introduction explains how language differences developed from the Tower of Babel, and the note from each country comments on the religious makeup of the country. As students move through the book, they can fill in the included "passport" with the passport stickers in the back of the book. 64 pages, hardcover.

▼▲
In Passport to the World by Craig Froman, the author provides kids with an idea of what life is like living in different places, speaking different languages. Accompanied by detailed pictures and "Did You Know?" fun facts, this book has close-up maps to show where the country is on the globe. A small section on each page tells the reader simple words like "Hello," "Goodbye," "Thank You," and "Peace" in that country's language.

I like how Craig Froman provides the reader with colorful pictures and interesting maps. By just reading a page, I feel like I've visited there! The author also includes a pretend passport to fill with passport stamp stickers; after readers "visit" a country, they can add that stamp to their passport along with the date. I recommend this book for kids of all ages!  Lauren Oliver, age 10, www.ChristianBookPreviews.com

▼▲
I'm the author/artist and I want to review Passport to the World: Your A to Z Guided Tour.
Back