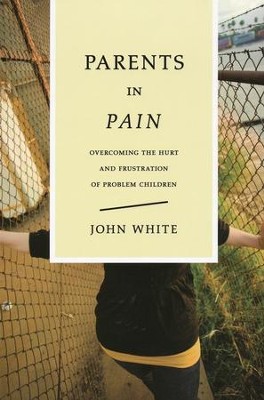 ▼▲
How do we deal with the guilt, frustration, anger and inadequacy that inevitably grip us when our children are in trouble? John White offers comfort to parents of children with severe problems - alcoholism, homosexuality, even suicide. With practical suggestions, he helps parents deal with their feelings and decide what to do in tough situations.

▼▲
A police car rolls up in front of your house--with your son in the back seat. A voice on the phone says your daughter is all right but won't tell you where she is--and then hangs up. A wallet disappears from your dresser and you're sure who took it--at least, somewhat sure. Many parents face problems beyond their ability to cope. John White ofers comfort to parents of children with severe problems--alcoholism, homosexuality, even suicide. Though he gives practical suggestions, this is not a how-to manual for making rebellious children behave. Rather the author helps all parents deal with their own guilt, frustration, anger and sense of inadequacy. White first asks, Why has the child rearing become such a complicated task? He looks to common sense, science and the Bible for an answer. Next he focuses on the parent-child relationship itself as trust erodes, arguments arise and the need for professional or legal counsel develops. Finally, he cautions us to avoid parenting techniques which emphasize pragmatism at the expense of what is moral and just. A book of comfort and counsel to parents in pain.

▼▲
John White was born in Liverpool, England, on March 5, 1924, and grew up in Manchester. After serving as a reconnaissance photographer in the Fleet Air Arms during World War II, he completed medical training at Manchester University. He later participated in a variety of short-term missions efforts (including Bible smuggling!) and capitalized on many opportunities to encourage Christians behind the Iron Curtain during the beginning of the Cold War. On June 25, 1955, White married Laureate May O'Hara. From 1955 to 1964 he served as a medical missionary with New Tribes Mission. Later he was appointed associate general secretary of the International Fellowship of Evangelical Students of Latin America. White emigrated to Canada with his family in 1965 and later completed his residency in psychiatry in Winnipeg, Manitoba. He next filled the post of associate professor of psychiatry at the University of Manitoba and also served locally as pastor of Church of the Way. He wrote 25 books as well as numerous articles and study guides. A much sought-after speaker, he lectured around the world at churches, conferences and leadership events. During his later life, White moved to Vancouver, British Columbia, helping to plant a Vineyard church there (Surrey Vineyard) and becoming involved in the larger Vineyard Christian Fellowship. John White died in 2002, but his written ministry lives on, with over 1.5 million of his books in print.

▼▲
I'm the author/artist and I want to review Parents in Pain.
Back
Back