Cahn is a much-sought-after speaker and has been highlighted in the New York Times as well as in many national and international media. 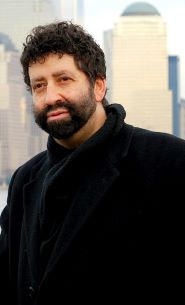 Are the unprecedented crises of our times, the signs and warnings of coming judgment? Does an ancient mystery hold the secret to the events of our times, and the future of America and the world? Is this mystery even behind the shakings that have now overtaken the world and America? How much time do we have left?

The Paradigm will reveal secrets and mysteries taking place all around you and show you what you never could have imagined. Jonathan Cahn, who caused an international stir with his New York Times best-selling book The Harbinger, will take you from the ancient Middle East to the news of the modern world on a journey you will never forget. As you open up The Paradigm, his most explosive book yet, you may never see your world the same way again.

Jonathan Cahn takes the reader on a journey to find the man called the Oracle. One by one each of the Jubilean mysteries will be revealed through the giving of a vision. The Oracle will uncover the mysteries of The Stranger, The Lost City, The Man With the Measuring Line, The Land of Seven Wells, The Birds, The Number of the End, The Man in the Black Robe, The Prophet's Song, The Matrix of Years, The Day of the Lions, The Awakening of the Dragon, and much more. The revelation is so big that it will involve and open up the mysteries of everything and everyone from Mark Twain to Moses, from King Nebuchadnezzar to Donald Trump, from the fall of empires to the rise of America, from a mystery hidden in a desert cave to another in an ancient scroll, from the palace of the Persian Empire to the US Senate, from the Summer of Love to the Code of Babylon, and much, much more.

The Harbinger is taking the nation by storm with prophesies and signs from 9/11 and beyond, that parallel Isaiah 9. Omens from Isaiah 9 show God's anger with the people of Israel; and now, we as a nation, defy God again. How does this correlate with our future?

The Harbinger, messianic rabbi Cahn explains the prophetic significance of the "Shemitah"---a recurring Sabbath year prescribed by the Torah. Learn how the ancient 7-year milestone is connected to world history, including the events of the Great Depression, 9/11, and---possibly---the fall of the United States