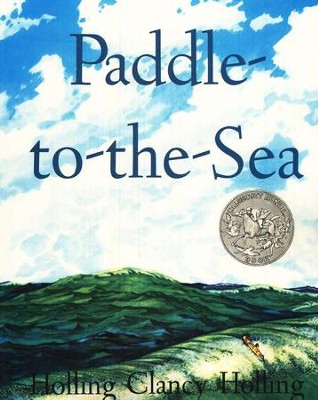 ▼▲
In the Nipigon country north of the Great Lakes a young boy carved the figure of an Indian in a canoe, christened him Paddle-to-the-Sea, and set him on a melting snow bank which the spring sun was truning into a tumbling mountain stream. Then Paddle began a journey that took him hundreds of miles from his birthplace. He escaped the jaws of a hungry sawmill and went on to see many things on his long trip through the Great Lakes and down the Saint Lawrence River--wild animals fleeing a forest fire, the wreck of a steamer caught in an icy winter storm on Lake Superior, loading and unloading at busy docks, the peacful farms bordering the Saint Lawrence. He took a dizzy plunge over Niagara Falls and managed by a miracle to survive the whirlpools. He was buffeted by many winds and currents and was helped on his way by human hands, until, at last, he reached the Atlantic and earned the right to be called a true Paddle-to-the-Sea. Recommended for ages 8 to 12. A 1942 Caldecott Honor book.

A young Indian boy carves a little canoe with a figure inside and names him Paddle-to-the-Sea. Paddle's journey, in text and pictures, through the Great Lakes to the Atlantic Ocean provides an excellent geographic and historical picture of the region.

▼▲
Born in Jackson County, Michigan, in 1900, Holling Clancy Holling graduated from the Art Institute of Chicago in 1923. He then worked in a taxidermy department of the Field Museum of Natural History in Chicago and spent time working in anthropology under Dr. Ralph Linton. During this period, he married Lucille Webster and within a year of their marriage accepted a position as art instructor on the first University World Cruise, sponsored by New York University. For many years, Holling C. Holling dedicated much of his time and interest to making books for children. Much of the material he used was known to him first hand, and his wife, Lucille, worked with him on many of the illustrations.

▼▲
"Geography of the best kind made vivid by the power of imagination." Horn Book

"Geography of the best kind made vivid by the power of imagination." Horn Book Guide

▼▲
I'm the author/artist and I want to review Paddle-to-the-Sea, Paperback.
Back
Back