Skip to main content
Owls in the Family
By: Farley Mowat
Stock No: WW413610 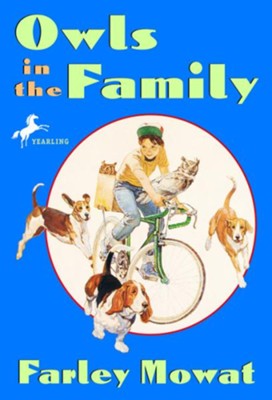 Owls in the Family

▼▲
Every child needs to have a pet. No one could argue with that.

But what happens when your pet is an owl, and your owl is terrorizing the neighbourhood?

In Farley Mowat’s exciting children’s story, a young boy’s pet menagerie—which includes crows, magpies, gophers and a dog—grows out of control with the addition of two cantankerous pet owls. The story of how Wol and Weeps turn the whole town upside down s warm, funny, and bursting with adventure and suspense.

▼▲
Farley Mowat was born in Belleville, Ontario, in 1921, and grew up in Belleville, Trenton, Windsor, Saskatoon, Toronto, and Richmond Hill. He served in World War II from 1940 until 1945, entering the army as a private and emerging with the rank of captain. He began writing for his living in 1949 after spending two years in the Arctic. He was an inveterate traveler with a passion for remote places and peoples. He wrote 25 books, which have been published in translations in over 20 languages in more than 60 countries. They include such internationally known works as People of the Deer, The Dog Who Wouldn’t Be, Never Cry Wolf, Westviking, The Boat Who Wouldn’t Float, Sibir, A Whale for the Killing, The Snow Walker, And No Birds Sang, and Virunga: The Passion of Dian Fossey. His short stories and articles appeared in the Saturday Evening Post, Maclean’s, Atlantic Monthly, and other magazines. He died in 2014.

▼▲
I'm the author/artist and I want to review Owls in the Family.
Back