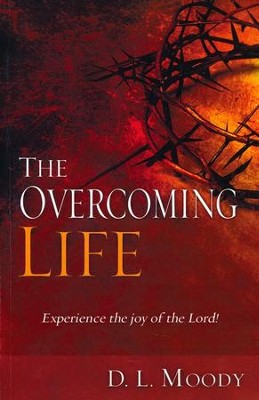 This is not the life of victory. Join D. L. Moody as he explores The Overcoming Life. Begin to experience a life ruled by Christ instead of fear. Learn how to let your life shine. Be confident of the eternal gifts that are yours to taste both now and later. Understand your true victory in Jesus.

▼▲
As a Christian, you have victory.
Jesus has overcome sin’s controlling force, conquered the shame of your past, and guaranteed your heavenly life with Him forever. Because of Christ, you have victory. But are you living in victory?
Sure, you understand that you’re supposed to be triumphant. You understand that you’re forgiven and no longer need to feel guilty about sins of the past. You know that eternal life awaits. You understand all of this, but you’re not living it. Instead, you’re paralyzed by the guilt and shame of the past, immobilized by fear for the future. This is not the life of victory.
Join D. L. Moody as he explores The Overcoming Life. Begin to experience a life ruled by Christ instead of fear. Learn how to let your life shine. Be confident of the eternal gifts that are yours to taste both now and later. Understand your true victory in Jesus.

▼▲
Dwight Lyman Moody (1837–1899) was born in Northfield, Massachusetts, the sixth in what would be a family of nine children. His father died when Moody was a child, leaving little provision for the family. Hence, Moody learned the value of hard work at an early age. He went to Boston at age seventeen, where he became a successful salesman in his uncle’s shoe store. His uncle made him promise to go to church, a promise that he faithfully kept, and he was won to the Lord by his Sunday school teacher.
In 1856, Moody went to Chicago, where he continued to succeed as a shoe salesman. His fervor in selling shoes was exceeded, however, by his zeal in winning souls, and he began to pack the pews of the church with young men. At age twenty-three, he devoted himself to full-time Christian work. Because of his poor grammar, his first attempts at public speaking were not well-received by all; one deacon told him that he would serve God best by keeping still. Nonetheless, Moody persevered, and he became famous nationwide for his Sunday school work. He was also known for his ministry to the soldiers during the Civil War; many were brought to Christ through his meetings and through his distribution of Bibles and tracts.
Moody traveled to Great Britain in 1867 to learn new methods in Christian work. It was there that his heart was stirred and forever changed by these words, spoken to him by a well-known evangelist: "The world has yet to see what God will do with&hellip;the man who is fully consecrated to Him." Moody determined to be that man.
The road of full commitment was not without trials. In 1871, the church that Moody pastored, the largest church in Chicago, was destroyed in the Chicago fire. But in the wake of this disaster, Moody received the filling of the Holy Spirit. Never before had he experienced such a mighty revelation of God’s love. After this empowering of the Spirit, Moody went on to accomplish even more for Christ. He held meetings in America, England, and Scotland, where thousands were in attendance and many were brought to Christ, and founded Moody Bible Institute.
When Moody died in 1899, he left a rich legacy: three Christian schools, a Christian publishing business, and a million souls won for Christ. On the day of his death on December 22, 1899, Moody exclaimed, "This is my triumph; this is my coronation day!"

▼▲
I'm the author/artist and I want to review Overcoming Life.
Back
Back