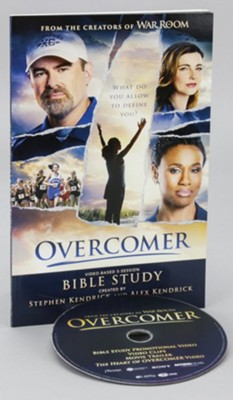 Many people feel they are less than who God says they are. We get our identity from our careers, our political positions, family roles in the family, and other things. This small group study uses clips from the film Overcomer to examine how we determine our identity and how we can find our true identity in Christ.

The Bible study is geared for adult groups to use prior to the movie or just after seeing the movie. The study includes clips from the movie.

The Overcomer Bible Study Kit has five sessions and includes:

▼▲
Learn to define yourself by what God says about you.


Stephen Kendrick is a cowriter and producer for Sherwood Pictures. He also works with Provident Films, developing marketing and Bible-study resources for churches in conjunction with Sherwood movies. Their first movie, Facing the Giants, played in more than one thousand theaters after its September 2006 release and grossed more than ten million dollars in box-office receipts. Facing the Giants DVD was later released in 14 languages, in 56 countries, and on every continent. More than 6,500 churches have used the movie for ministry and community outreach.

How to Use this Study

START. Each study begins with an introduction to the lesson to come. This section is designed for use in a group setting but can also be adapted for personal study. Read this section and answer the introductory questions together if you're in a group.

WATCH. The Bible-study DVD contains clips from the film OVERCOMER to accompany each session. Each clip is two to four minutes in length and is supported by a summary of the clip and discussion questions based on the truths illustrated.

ENGAGE. This section is the primary focus of each week. Leaders should spend the majority of the group session teaching while using the verses and questions provided in this section.

PERSONAL STUDY. After attending the group session, members should complete the three days of personal study at home before the next group session. Through this personal study, members will explore biblical content and application that support the concepts introduced in the movie clips and group discussion.

Q: Does this movie have language or subtitles in Spanish?

▼▲
I'm the author/artist and I want to review Overcomer DVD Bible Study Kit.
Back
Back