Skip to main content
Out of the Depths
By: Edgar Harrell USMC, David Harrell
Stock No: WW217647 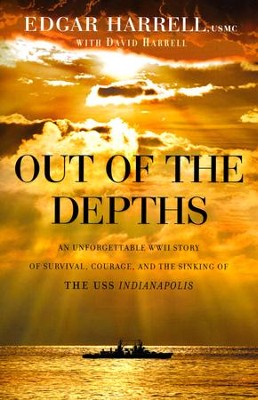 Out of the Depths

▼▲
In Out of the Depths, retired Marine Edgar Harrell tells the story of what happened to the USS Indianapolis and its crew after the fateful attack on July 30, 1945. After successfully delivering uranium for the atomic bombs that would end World War II, their ship was struck by two Japanese torpedoes. For the next five days, survivors of the attack fought dehydration, exposure, saltwater poisoning, and shark attack. Readers will be astounded by Harrell's courage, ingenuity and faith that helped keep him alive after the worst naval disaster in U.S. history.

July 30, 1945: After transporting uranium for the atomic bomb that would soon be dropped on Hiroshima, the USS Indianapolis headed unaccompanied toward a small island in the South Pacific. At 12:14 a.m., she was struck by two Japanese torpedoes, rolled over, and sank.

Marine survivor Edgar Harrell vividly describes the horrors of being plagued by dehydration, exposure, saline poisoning, and sharks. This is a story of courage, ingenuity, and faith in God's providence in the midst of the greatest catastrophe at sea in the history of the U.S. Navy.

▼▲
Edgar Harrell, USMC (Ret.), lives in Tennessee with his wife, Ola, enjoying their grandchildren and their great-grandchildren. Edgar speaks extensively around the United States about his survival at sea.

David Harrell
, PhD, son of Edgar Harrell, is the senior pastor-teacher of Calvary Bible Church in Joelton, Tennessee. He is married to Nancy, and together they have three children and a growing number of grandchildren.

▼▲
I'm the author/artist and I want to review Out of the Depths.
Back
Back