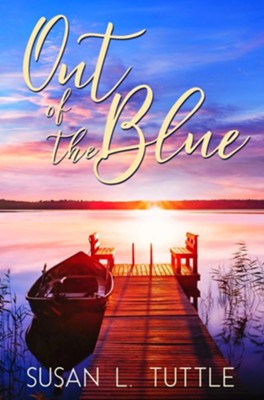 Out of the Blue

▼▲
Nate and Gwen have two things in common---a desire to minister to kids, and painful pasts to overcome. When Gwen's grandfather decides to retire and sell Camp Hideaway, Nate seizes the opportunity to begin a rehab retreat center for juveniles, while Gwen is challenged to return to the work she once loved. Will they unexpectedly discover romance? 304 pages, softcover from Iron Stream.

Falling in love again wasn’t on her checklist, but he’s about to pencil it in.

Nate Reynolds’s ugly history has dogged him long enough. He has spent years reforming himself, but there has to be a purpose for all the pain in his youth. When he discovers the perfect campground for rehabbing juvenile delinquents, he sees his chance for redemption. Even if it means butting heads with the owner’s granddaughter, Gwen Doornbos, a woman who, for all her sharp edges, possesses a heart similar to his. The more time he spends with her, the more he envisions a future he once thought impossible.

Four years ago, Gwen Doornbos lost her husband at the hands of a troubled teen. Her dream of ministering to kids died with him,and she returned home to help her grandfather run their family summer camp until his retirement. That day has finally arrived, except her grandfather has other plans for Camp Hideaway, and they include the irritatingly handsome Nate, a do-gooder with more brawn than sense who insists on bringing the past right to her door.

When an accident requires Gwen to temporarily assist Nate, she discovers that the campers challenge her in ways she’s not ready to face. Yet if she can find the courage to stay, the darkness that has shrouded her for so long may lift to reveal a love arriving out of the blue.

ACFW Carol Award finalist, Susan L. Tuttle lives in Michigan, the Mitten State, where she’s a mom of three and happily married to her best friend. Between homeschooling her youngest and leading the women’s ministry at church, she finds time to write stories filled with inspiration, hope, and encouragement. Connect with Susan at susanltuttle.com.

▼▲
I'm the author/artist and I want to review Out of the Blue.
Back