CHRISTMAS MEGA SALE: Save up to 85% off through 10/20 >
Osman's Dream: The History of the Ottoman Empire
By: Caroline Finkel 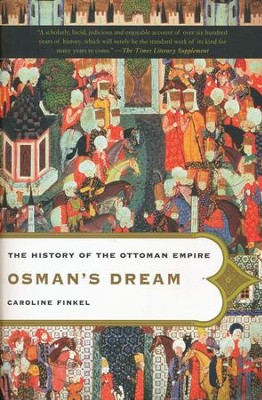 Osman's Dream: The History of the Ottoman Empire

▼▲
"A scholarly, lucid, judicious, and enjoyable account of over 600 years of history. Will surely be the standard work of its kind for many years to come,"---Times Literary Supplement (U.K.). "The sheer amount of information packed between these two covers makes it a landmark achievement,"---New York Sun. 688 pages, softcover.

▼▲
The definitive history of the Ottoman Empire

The Ottoman Empire was one of the largest and most influential empires in world history. Its reach extended to three continents and it survived for more than six centuries, but its history is too often colored by the memory of its bloody final throes on the battlefields of World War I. In this magisterial work-the first definitive account written for the general reader-renowned scholar and journalist Caroline Finkel lucidly recounts the epic story of the Ottoman Empire from its origins in the thirteenth century through its destruction in the twentieth.

▼▲
Caroline Finkel has lived in Istanbul for many years and traveled widely in Turkey and the former Ottoman lands. She has a doctorate in Ottoman history from the School of Oriental and African Studies at the University of London. Osman's Dream is her third book. She currently divides her time between Istanbul and London.

▼▲
Caroline Finkel has lived in Istanbul for many years and traveled widely in Turkey and the former Ottoman lands. She has a doctorate in Ottoman history from the School of Oriental and African Studies at the University of London. Osmans Dream is her third book. She currently divides her time between Istanbul and London.

▼▲
"Caroline Finkel effortlessly conveys the high drama of Ottoman history."—Orhan Pamuk
"Magnificent.... For perhaps the first time in English, a genuine Ottoman scholar has written a clear narrative account of the great empire based mainly on Turkish rather than hostile western accounts. The result is not only a revelation; it is a vital corrective to the influential but partial and wrong-headed readings of the flagbearers of intellectual Islamophobia."—William Dalrymple, The Scotsman
"The timing of Caroline Finkel's splendidly written Osman's Dream reflects the buoyant state of Ottoman scholarship. Neglected archives have been triumphantly mined by a new generation of scholars, and Finkel's intimacy with the material makes this the most authoritative narrative history of the empire yet published."—Literary Review
"Osman's Dream is a deeply sympathetic, compelling and highly readable account of the rise and fall of an immensely complex and dynamic society which, at its height was the most the most far-reaching and the most powerful Empire the world had ever seen. But it is also something more. For Caroline Finkel has not only told history of how a band of Turcoman warriors from eastern Anatolia came to dominate so much of the world. She has also shown why that history matters, why today we are in no position to understand, not merely the modern Republic of Turkey but also modern Islam unless we also understand the past, and the present perception, of the greatest and most enduring of the Islamic states."—Anthony Pagden, Distinguished Professor of History and Political Science, UCLA
"Finkel has managed to produce a scholarly, lucid, judicious and enjoyable account of over 600 years of history in a single volume, which will surely be the standard work of its kind for many years to come."—Times Literary Supplement
"An absorbing, monumental story of one of the most reviled and misunderstood of all empires.... Osman's Dream is a marvelous achievement."—BBC History Magazine
"How timely to have such a lucid, well-researched, and fair-minded history of the Ottoman Empire--and one too which treats it not as some exotic and alien world, but as part of our common past."—Margaret MacMillan, author of Paris 1919
"Osman's Dream is a treasure for anyone who wants to know exactly what happened when in the Ottoman Empire. Here at last is a reliable history that takes into full account not only the work of international and Turkish historians but also the writings of the Ottomans themselves."—Hugh Pope, author of Sons of the Conquerors: The Rise of the Turkic World
"Finkel has brilliantly woven together a highly readable survey of 600 years of Ottoman history. Well researched and beautifully written, Osman's Dream will be essential reading for anyone who wants to know more about the Empire that ruled for centuries over so many of our contemporary trouble spots--from the Balkans to the Arab world."—Heath W. Lowry, Princeton University
"Finkel is judicious, evenhanded and objective...is an impressive and important work."—The Nation
"[Finkel's] mastery of the historical literature is obvious: The sheer amount of information packed between these two covers makes it a landmark achievement."—New York Sun
"With this superb book, Finkel boldly covers new ground in striving to show the Ottoman Empire from within.... Having spent 15 years living in Turkey, Finkel is uniquely positioned to overcome the practical hurdles to Ottoman research, but her real strength is in historiography: she has a keen ability to extract salient observations from her sources even as she renders their political motives transparent. The result is a panorama of the Ottoman Empire to rival the best portraits of the Romanovs and Habsburgs, and a must-have for history collections."—Booklist

▼▲
I'm the author/artist and I want to review Osman's Dream: The History of the Ottoman Empire.
Back
×
Back
×