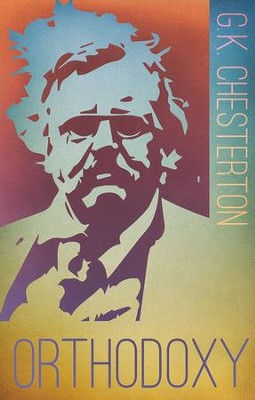 ▼▲
G. K. Chesterton was a self-described pagan at age twelve and totally agnostic by age sixteen. Yet his spiritual journey ultimately led to a personal philosophy of orthodox, biblical Christianity. In 1908, at the age of thirty-five, Chesterton published an account of his experiences. In Orthodoxy, the masterpiece of his brilliant literary career, he applies the concept of correct reasoning to his acceptance of Christian faith. Written in a down-to-earth and familiar style, this book nevertheless presents formal, scholarly arguments. Paradox and contradiction, Chesterton maintains, do not constitute barriers to belief; imagination and intuition are as relevant to the process of thought and understanding as logic and rationality. He defines his insights with thought-provoking analogies, personal anecdotes, and engaging humor, making this century-old book a work of enduring charm and persuasion.

▼▲
In response to G. K. Chesterton's book Heretics, H. G. Wells said, "I will begin to worry about my philosophy...when Mr. Chesterton has given us his." And that is what Chesterton set out to do. But, like any good theorist, he truly believed that he could not undertake this task without first articulating what he did not agree with. Having completed this act and receiving many responses to it, he set out to articulate the philosophy he had come to believe.In a personal way, Chesterton uses "a set of mental pictures" to describe his journey in discovering the truth. Among his key points is the role of reason and fantasy in helping him to discover true orthodoxy. They led him to see that this was not a product of chance but was fashioned by a divine Creator. His timeless wisdom is relevant to the struggles of many Christians today.Chesterton was surprised to find that what he discovered about orthodoxy was not unique to him at all; rather, it had been passed down through many generations. And he admitted, after much struggle and in much humility, "I will not call it my philosophy, for I did not make it. God and humanity made it; and it made me."

▼▲
Gilbert Keith Chesterton (1874And#8211;1936) was an English writer, philosopher, satirist, and social critic. During his lifetime, the prolific Chesterton wrote eighty books, several hundred poems, some two hundred short stories, four thousand essays, and several plays. He was also known as a strong debater and Christian apologist. He often took on what he considered to be the flawed philosophy of modernism found in the writings of his good friends Oscar Wilde and George Bernard Shaw. It was Shaw who once referred to Chesterton in Time magazine as "a man of colossal genius." Chesterton's writings consistently displayed wit and a sense of humor. His ingenious use of paradox in his commentaries on the leading political, economic, philosophical, and theological beliefs of his day makes his writings as relevant today as they were a century ago.

▼▲
I'm the author/artist and I want to review Orthodoxy.
Back
Back