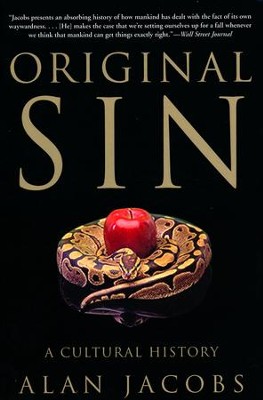 Do we arrive in this world predisposed to evil? St. Augustine passionately argued that we do; his opponents thought the notion was an insult to a good God. Ever since Augustine, the church has taught the doctrine of original sin, which is the idea that we are not born innocent, but as babes we are corrupt, guilty, and worthy of condemnation. Thus started a debate that has raged for centuries and done much to shape Western civilization.

Essayist and biographer Alan Jacobs introduces us to the world of original sin in Original Sin: A Cultural History, which he describes as not only a profound idea but a necessary one. As G. K. Chesterton explains, "Only with original sin can we at once pity the beggar and distrust the king." Perhaps no Christian doctrine is more controversial; perhaps none is more consequential. Whether or not we believe in original sin, the idea has shaped our most fundamental institutions—our political structures, how we teach and raise our young, and, perhaps most pervasively of all, how we understand ourselves.

In Original Sin, Jacobs takes readers on a sweeping tour of the idea of original sin, its origins, its history, and its proponents and opponents. And he leaves us better prepared to answer one of the most important questions of all: Are we really, all of us, bad to the bone?

Alan Jacobs is professor of English at Wheaton College in Illinois. He is the author of several books, including most recently The Narnian, a biography of C. S. Lewis. His literary and cultural criticism has appeared in a wide range of periodicals, including the Boston Globe, The American Scholar, First Things, Books & Culture, and The Oxford American.

▼▲
“[A]n engaging and lucid work by a sophisticated Evangelical from the American South. . . . For all its American bias, Alan Jacobs’s highly readably ORIGINAL SIN might fill one of the gaps in the post-Christian memory banks.”
“One wouldn’t expect a book about original sin to be entertaining, but Jacobs makes it so with deft prose and a touch of humor.”
“A strangely entertaining cultural survey . . . ”
Jacobs’s discussion is terrifically worthwhile for exposing how the idea of “evil,” as enunciated iwthin the doctrine, undergoes permutations and translations over time
Splendid...a book endeavoring to help us say and do something about the sin which so easily ensares. Strikingly, Jacobs argues that the ‘confraternity’ of humanity is best grounded not in our being made in the image of God but in our being made sinful in Adam. Truly a revolutionary thought—that the roots of our common humanity might be found, not in our dignity or even our potential, but in our depravity.”
“A deep pool of wisdom . . . an expression of what’s wrong with all of us. Jacobs’ prose often sings . . . Careful when you open this book--it could keep you up at nights.”
“Follows the history of thinking about original sin from Augustine to ‘Hellboy’ and rewards the curious reader with unique knowledge (of good and evil) on every page.”
“Jacobs’s flowing prose keeps the book moving at a nice pace.”
“Jacobs is a superb writer whose work is beginning to get the wider notice it has long deserved.”
Alan Jacobs presents an engagingly written, eminently humane, and insightful account of an all-important subject that is both timeless and timely.
“Alan Jacobs’ cultural history of the controversies that Saint Augustine’s concept gave birth to is fascinating, entertaining, wonderfully researched, and thoroughly even-tempered, giving even the most disagreeable voices their say. Original Sin may well become the definitive book on the subject.”
I do not believe in original sin. I do believe in Alan Jacobs. He is one the smartest and wittiest writers around on matters involving religion, and ORIGINAL SIN is a gem.
In this brilliant account, Wheaton College literature professor Jacobs traces the idea of original sin from the Bible to the present day. . . . In his hands these abstruse theological disputes are utterly engrossing.
“With extraordinary erudition and just enough lightness of touch to leaven the lump, Alan Jacobs traces the tangled ways that we have tried to think about human cussedness.
Replete with examples drawn from a number of different cultural expressions, including literature, film, and philosophy, [Original Sin] is intended to introduce a broad genearl audience to the complexity of explaining how human beings act evilly toward one another.
A brilliantly illuminating, deeply thought-provoking intellectual journey.

▼▲
I'm the author/artist and I want to review Original Sin: A Cultural History.
Back
Back