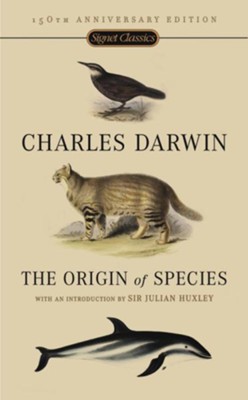 ▼▲
Charles Darwin’s classic that exploded into public controversy, revolutionized the course of science, and continues to transform our views of the world.

Few other books have created such a lasting storm of controversy as The Origin of Species. Darwin’s theory that species derive from other species by a gradual evolutionary process and that the average level of each species is heightened by the "survival of the fittest" stirred up popular debate to fever pitch. Its acceptance revolutionized the course of science.

As Sir Julian Huxley, the noted biologist, points out in his illuminating introduction, the importance of Darwin’s contribution to modern scientific knowledge is almost impossible to evaluate: "a truly great book, one which can still be read with profit by professional biologist."

▼▲
Charles Robert Darwin was born in 1809 in Shrewsbury, England. At Cambridge University he formed a friendship with J. S. Henslow, a professor of botany, and that association, along with his enthusiasm for collecting beetles, led to "a burning zeal," as he wrote in his Autobiography, for the natural sciences. A voyage to the Southern Hemisphere on the H.M.S. Beagle between 1831 and 1836 would lay the foundation for The Origin of Species, published in 1859. His other works include The Descent of Man, and Selection in Relation to Sex (1871) and Recollections of My Mind and Character, also titled Autobiography (1887). Charles Darwin’s Diary of the Voyage of the H.M.S. Beagle was published posthumously in 1933.

▼▲
"Next to the Bible no work has been quite as influential, in virtually every aspect of human thought, as The Origin of Species."—Ashley Montagu

"Darwin was one of history’s towering geniuses and ranks with the greatest heroes of man’s intellectual progress."—George Gaylord Simpson in The Meaning of Evolution

"It is clear that here is one of the most important contributions ever made to philosophic science; and it is at least behooving on scientists, in the light of the accumulation of evidence which the author has summoned in support of his theory, to reconsider the grounds on which their present doctrine of the origin of species is based."—The New York Times

"Amazingly, 150 years after the publication of The Origin of Species, Darwin's seminal work on the theory of evolution remains the authoritative tract on the subject."—Library Journal

▼▲
I'm the author/artist and I want to review The Origin Of Species: 150th Anniversary Edition - eBook.
Back
×
Back
×