Skip to main content
The Oregon Trail Romance Collection: 9 Stories of Life on the Trail into the Western Frontier - eBook
By: Amanda Cabot, Melanie Dobson, Pam Hillman
Stock No: WW76029EB 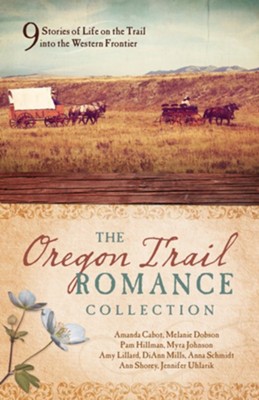 The Oregon Trail Romance Collection: 9 Stories of Life on the Trail into the Western Frontier - eBook

▼▲
Risking all their hopes and dreams on promises of fertile land in the Northwest, thousands set off on the Oregon Trail between 1843 and the 1890s. Despite the majestic landscape and daily opportunities for fireside chats, the trail was hardly the place these migrants expected to find romance. In these nine novellas, travelers on the wagon trains experience all the challenges and dangers of the trail. Some will lose much, settle down along the trail, and even turn back home, while others endure to the end. Readers will enjoy traveling along with the romantic adventures in which faith is honed.

▼▲
Amanda Cabot is the bestselling author of more than thirty novels. A former Easterner, she’s happy to now be living in Cheyenne, Wyoming, with the Oregon Trail and Fort Laramie just a short drive away.
Two-time Carol Award winner and bestselling author of fourteen novels, Melanie Dobson is the former corporate publicity manager at Focus on the Family and owner of Dobson Media Group. Because of her husband’s work in the film industry, their family has lived in multiple states as well as Germany, but the Dobson family is settled for now in a small town near Portland, Oregon. Melanie loves connecting with readers via her website at www.melaniedobson.com.
Award-winning author Pam Hillman, a country girl at heart, writes inspirational fiction set in the turbulent times of the American West and the Gilded Age. She lives with her family in Mississippi. Contact Pam at her website: www.pamhillman.com.
Although currently residing in North Carolina, Myra Johnson proudly claims her heritage as a native Texan, and she sorely misses real Texas barbecue! Myra is a two-time ACFW Carol Award finalist, winner of the 2005 RWA Golden Heart, and winner of the 2014 Christian Retailing’s Best Award for historical fiction. Married since 1972, Myra and her husband have two bright, beautiful daughters, two mission-minded sons-in-law, and seven amazing grandchildren. The Johnsons share their home with a couple of very pampered rescue dogs.
Amy Lillard is a 2013 Carol award-winning author who loves reading romance novels from contemporary to Amish. She was born and raised in Mississippi, but now lives in Oklahoma with her husband and their teenage son.

DiAnn Mills is a bestselling author who believes her readers should expect an adventure. She combines unforgettable characters with unpredictable plots to create action-packed, suspense-filled novels.

Her titles have appeared on the CBA and ECPA bestseller lists; won two Christy Awards; and been finalists for the RITA, Daphne Du Maurier, Inspirational Readers’ Choice, and Carol award contests. Library Journal presented her with a Best Books 2014: Genre Fiction award in the Christian Fiction category for Firewall.

DiAnn is a founding board member of the American Christian Fiction Writers; the 2015 president of the Romance Writers of America’s Faith, Hope & Love chapter; and a member of Advanced Writers and Speakers Association and International Thriller Writers. She speaks to various groups and teaches writing workshops around the country. She and her husband live in sunny Houston, Texas.

DiAnn is very active online and would love to connect with readers on any of the social media platforms listed at www.diannmills.com.

Anna Schmidt is the author of over twenty works of fiction. Among her many honors, Anna is the recipient of Romantic Times’ Reviewer’s Choice Award and a finalist for the RITA award for romantic fiction. She enjoys gardening and collecting seashells at her winter home in Florida.

ANN SHOREY has been a full-time writer for over twenty years. Her writing has appeared in Chicken Soup for the Grandma’s Soul, and in the Adams Media Cup of Comfort series. She made her fiction debut with The Edge of Light, Book One in the At Home in Beldon Grove series. Her latest releases include Love’s Sweet Beginning, the third book in the Sisters at Heart series, and a novella in the Sincerely Yours collection.
The Oregon Trail Romance collection is a perfect fit for her, as Ann’s great-grandparents came west over the Oregon Trail as part of one of the last wagon trains. According to her grandfather’s memoirs, "there were thousands of covered wagons on the road." This novella is the story of one of those wagons.
Jennifer Uhlarik discovered the western genre as a preteen, when she swiped the only "horse" book she found on her older brother’s bookshelf. A new love was born. Across the next ten years, she devoured Louis L’Amour westerns and fell in love with the genre. In college at the University of Tampa, she began penning her own story of the Old West. Armed with a BA in writing, she has won five writing competitions and was a finalist in two others. In addition to writing, she has held jobs as a private business owner, a schoolteacher, a marketing director, and her favorite—a full-time homemaker. Jennifer is active in American Christian Fiction Writers and is a lifetime member of the Florida Writers Association. She lives near Tampa, Florida, with her husband, teenage son, and five fur children.

▼▲
I'm the author/artist and I want to review The Oregon Trail Romance Collection: 9 Stories of Life on the Trail into the Western Frontier - eBook.
Back
Back