Skip to main content
NEW CYBER DEALS Save up to 90% thru 12/12  shop now >
Opening Day: The Story Of Jackie Robinson's First Season
By: Jonathan Eig
Stock No: WW94617 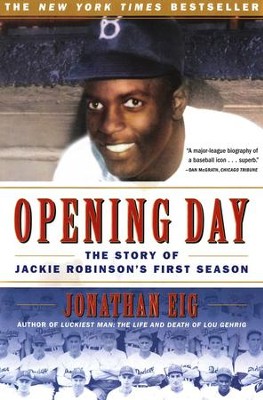 ▼▲
The first African American to play major league baseball, this biography focuses on Jackie Robinson's remarkable life both on and off the diamond. With insight into the cultural context of his integration into the Dodgers and the league, interviews from players and archived materials are used for a complete picture of one of baseball's favorite stories. 336 pages, paperback.

▼▲
This bestselling account of the most important season in baseball history, 1947, tells the dramatic story of how Jackie Robinson broke the color barrier and changed baseball forever.

April 15, 1947, marked the most important opening day in baseball history. When Jackie Robinson stepped onto the diamond that afternoon at Ebbets Field, he became the first black man to break into major-league baseball in the twentieth century. World War II had just ended. Democracy had triumphed. Now Americans were beginning to press for justice on the home front—and Robinson had a chance to lead the way.

In Opening Day, Jonathan Eig tells the true story behind the national pastime’s most sacred myth. He offers new insights into events of sixty years ago and punctures some familiar legends. Was it true that the St. Louis Cardinals plotted to boycott their first home game against the Brooklyn Dodgers? Was Pee Wee Reese really Robinson’s closest ally on the team? Was Dixie Walker his greatest foe? How did Robinson handle the extraordinary stress of being the only black man in baseball and still manage to perform so well on the field? Opening Day is also the story of a team of underdogs that came together against tremendous odds to capture the pennant. Facing the powerful New York Yankees, Robinson and the Dodgers battled to the seventh game in one of the most thrilling World Series competitions of all time.

Drawing on interviews with surviving players, sportswriters, and eyewitnesses, as well as newly discovered material from archives around the country, Jonathan Eig presents a fresh portrait of a ferocious competitor who embodied integration’s promise and helped launch the modern civil-rights era. Full of new details and thrilling action, Opening Day brings to life baseball’s ultimate story.

▼▲
Jonathan Eig is a former senior special writer for The Wall Street Journal. He is the author of several books, including two highly acclaimed bestsellers, Luckiest Man: The Life and Death of Lou Gehrig and Opening Day: The Story of Jackie Robinson’s First Season. Visit him at JonathanEig.com.

▼▲
I'm the author/artist and I want to review Opening Day: The Story Of Jackie Robinson's First Season.
Back
Back