Skip to main content
On the Soul and Resurrection (Popular Patristics)
Translated By: Catherine P. Roth
By: St. Gregory of Nyssa
Stock No: WW411205 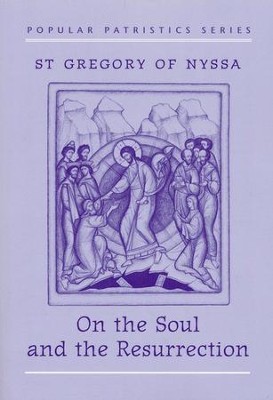 On the Soul and Resurrection (Popular Patristics)

Translated By: Catherine P. Roth
By: St. Gregory of Nyssa
More in Popular Patristics Series
SVS Press / Paperback
Write a Review
Buy 48 or more for $12.34 each.
In Stock
Stock No: WW411205

▼▲
The resurrection of the body, perhaps more than any other Christian doctrine, requires us to face the implications of faith for our personal lives and for our understanding of the world. This issue faced St. Paul in his dealing with the early church and also troubles St. Gregory of Nyssa in the fourth century A.D.

St. Gregory, educated in the prevailing Greek philosophical system, yearned to synthesize his faith and his philosophy. Struggling with the issue of resurrection, he followed Plato's example and dramatized the interior workings of his mind in dialogue form, which his elder sister St. Macrina plays in the role of teacher. The position which Gregory and Macrina eventually reach in On the Soul and Resurection corresponds to that of St. Paul, in that our bodies will rise again as bodies, but in a finer and more glorious form than we have now. Expressing this belief in terms of Greek silence, the dialogue assumes that the same physical elements which compose our present bodies must be reassembled in our resurrection bodies; otherwise our bodies would be recreated rather than raised.

Recognized Patristic scholars provide short but comprehensive and clear introductory essays according to their specializations for each volume.

Texts include classics of Christian literature, thematic volumes, homily collections, letters, spiritual guidance, and poetical works from a wide variety geographical contexts and historical backgrounds. The purpose of the series is to mine the riches of the early church and to make these invaluable writings available to all.

▼▲
I'm the author/artist and I want to review On the Soul and Resurrection (Popular Patristics).
Back
Back