Skip to main content
CYBER WEEK SALE! Spot great deals up to 88% off. >
On the Incarnation
By: Saint Athanasius of Alexandria
Stock No: WW9116792 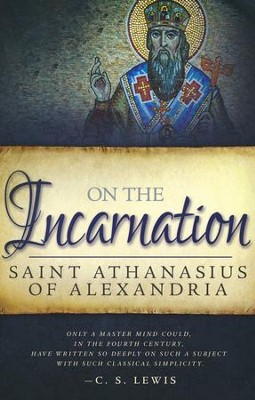 ▼▲
During the fourth century, controversy raged in the church regarding the nature of Jesus christ. On one side were the Arians, led by the Bishop Arius, who argued that Father, Son, and Holy Spirit were materially separate from one another. They believed that Jesus had been created out of "non-existence" and thus was not on the same level of dignity as God the Father.

In response, Athanasius, Bishop of Alexandria, wrote On the Incarnation, a staunch defense of the full divinity and full humanity of Christ. In simple language and with Scripture as a guide, he argued for the eternal nature of the Trinity and that Jesus Christ is not a creation of God the Father but has existed from the very beginning. Athanasius celebrates the redeeming work that came forth through the God-man, Jesus Christ, and His eternal existence and essential unity with the Father.

Ultimately, Athanasius was exiled five times by four different Roman emperors due to his defense of the Trinity, but he remained faithful to his beliefs. On the Incarnation is often included on his lists of books every Christian should read.

▼▲
Two names stand above all others in the history of the early Christian church: Augustine and Athanasius. The former was from the West and contended for the doctrine of grace against Roman moralism, while the latter came from the East and became a champion of orthodoxy against Arian attacks on the doctrine of the Trinity. On the Incarnation was Athanasius’ second apologetic work, and in it he defends the Christian faith and tries to convince Jews and Greeks that Jesus was not a prophet or teacher but the Christ, the divine incarnation of God’s Word.
You may find yourself reading Athanasius and thinking that the divine incarnation of Jesus is an obvious point, only to realize that, at some point, it wasn’t so obvious. Three hundred years after Jesus ascended to heaven, the Council of Nicaea was still trying to figure out exactly who Jesus was. Through his presence at the Council of Nicaea as an assistant to Alexander and his work in this writing, Athanasius helped early Christianity—indeed all Christianity—to understand something more of the mystery of our faith: God was manifested in the flesh. All Christians, directly or indirectly, have been influenced by Athanasius because of his foundational insistence of who Jesus is.
There is perhaps no other Christian writing in which the coming of our Savior is proclaimed so clearly as the way of victory over death. Thanks to Athanasius, and so many other early Christian thinkers, we have a firmer footing in our own exploration and understanding of who God is and how He works.

▼▲
Athanasius (c. 297–373), Bishop of Alexandria and one of the most illustrious defenders of the Christian faith, was born at Alexandria around 297 AD. He is known as a church father, a noted Egyptian leader, a master theologian, and a staunch defender of Trinitarianism against the arguments of Arianism, which he began as a bishop’s assistant at the First Council of Nicaea. He also struggled against several Roman emperors, which caused seventeen of his forty-five years as bishop to be spent in exile. His writings were cherished by church fathers, both in the West and the East. He is known for his devotion to the Word-become-man, his great pastoral concern, and a profound interest in monasticism. He is venerated by the Roman Catholic Church, Oriental and Eastern Orthodox churches, the Lutheran Church, and the Anglican Communion.

▼▲
I'm the author/artist and I want to review On the Incarnation.
Back
Back