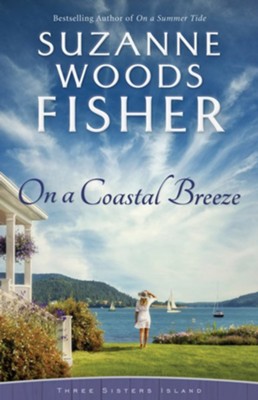 Everything happens for a reason, Maddie Grayson believes. But her motto gets sorely tested when the new minister parachutes into town and offers her a chance to change what happens next.

▼▲
For Madison Grayson, life is good. Newly licensed as a marriage and family therapist, she can't wait to start her practice. Despite the unfortunate shortage of eligible bachelors on the island--they're all too young, too old, or too weird--Maddie feels like she's finally found her sweet spot. Not even one panic attack in the last year. Not one.

And then Ricky O'Shea drops in. Literally. Floating down from the pure blue sky, the one man in the world she hoped never to see again--the one who'd been her archnemesis from kindergarten through her senior dance--parachutes into town, landing on Boon Dock, canopy draping behind him like a superhero. Ricky O'Shea. Now Pastor Rick, the new minister on Three Sisters Island.

With wit and a bit of whimsy, bestselling author Suzanne Woods Fisher invites you back to Three Sisters Island where family, forgiveness, and a second chance at love await.

▼▲
Suzanne Woods Fisher is an award-winning, bestselling author of more than thirty books, including On a Summer Tide, as well as the Nantucket Legacy, Amish Beginnings, The Bishop's Family, The Deacon's Family, and The Inn at Eagle Hill series, among other novels. She is also the author of several nonfiction books about the Amish, including Amish Peace and Amish Proverbs. She lives in California. Learn more at www.suzannewoodsfisher.com and follow Suzanne on Facebook @SuzanneWoodsFisherAuthor and Twitter @suzannewfisher.

You are well known for both your fiction and nonfiction titles revolving around the Amish and
their way of life. Why did you decide to write a completely different type of novel?
Completely different, yes. The characters in the Three Sisters Island series use cell phones and cars and
computers. (They try to, anyway. The power is very unreliable on this remote little island.) But there’s
much these people have in common with my Amish fiction: at the heart of these stories is faith, family
and community.


On a Coastal Breeze is the second book in the Three Sisters Island series. How is this book different
from On a Summer Tide?
The series is based on Paul Grayson and his three daughters: Cameron, Madison, and Blaine. Each sister
takes a turn as the main character. In On a Coastal Breeze, it’s Maddie’s turn to take center stage.

Why did you select Maine as the setting for your series?
My editor and I considered a number of different coastal settings before landing on Maine. And I’m so
glad we did! It’s very accessible, affordable, inclusive. Also, I’m familiar with Maine. My dad went to
Bowdoin College, and relatives live in Brunswick.

What type of research was required for writing this series?
Time spent in coastal Maine during the summer! Ah . . . such a hardship (not!). All kidding aside, there’s
nothing like “being there” to get a sense of the isolation, the remoteness. The series are set in summer, but
there were a few islands I traveled to that gave me a sense of winter life up there.

Each book in the Three Sisters Island series focuses on a different sister. Can you tell us about your
main character, Madison Grayson?
Maddie is a middle child in every way. She’s caught in between two sisters with strong personalities, and
takes her role as a counselor very seriously. At her best, she’s a peacemaker, deep and thoughtful. At her
worst, she meddles in others’ business and suffers acutely from a lack of self-confidence.

Ricky O’Shea is the protagonist for this story. Can you tell us a little more about his character and
why you chose his profession?
Right from the start, I had in mind the idea of bringing a young pastor to this island. It’s longing for one!
And Rick O’Shea is just the right fit. Optimistic, adventurous, charismatic—nothing is impossible to
Pastor Rick. Except for this one little problem in his life that just won’t go away . . .
Madison and Ricky have met before and not under good circumstances. How do you feel their past
plays a part in their future?
Here’s a hint to answer that question: say the name Rick O’Shea three times fast.
When will the third book in your series release?
The conclusion to Three Sisters Island will release in May 2021, which will be here in the blink of an eye.