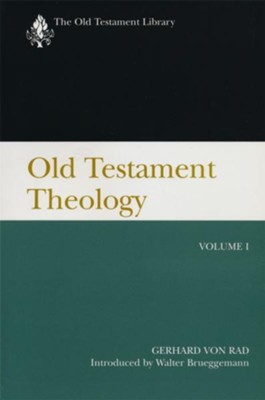 ▼▲
The reissue of Gerhard von Rad's Old Testament Theology is a most welcome event, as welcome as it is important to us. It is clear that von Rad (1901-1971), long-time professor in the University of Heidelberg, is the defining and preeminent interpreter of the Christian Old Testament in the twentieth century, and that this two-volume work is the most definitive publication in his long, prolific scholarly career. Von Rad's work occupies such a dominant place in twentieth-century theological exposition that it is possibile and useful to trace theological interpretation in the twentieth century in terms of periods "pre-von Rad, von Rad, and post-von Rad." While that sequence has already become "history" for us at the outset of the twenty-first century, it is clear that the turn von Rad has wrought in expository method and horizon continues to inform our work in decisive ways and will continue to do so for years to come.

This republication of a classic work contains a new introduction by Walter Brueggemann that places Gerhard von Rad's work within the context of German theology, Old Testament theology, and the history of interpretation of the Old Testament. In Old Testament Theology, von Rad applies the most advanced results of form criticism to develop a new understanding of the Bible. His original approach is now available once again in English.

The Old Testament Library provides fresh and authoritative treatments of important aspects of Old Testament study through commentaries and general surveys. The contributors are scholars of international standing.

▼▲
Gerhard von Rad was Professor of Old Testament at the University of Heidelberg in Germany until his death in 1971. He is the author of several books, including Wisdom in Israel and Holy War in Ancient Israel.

▼▲
I'm the author/artist and I want to review Old Testament Theology, Volume 1.
Back
Back