Skip to main content
The Old Testament Canon and the Apocrypha
By: William Webster
Stock No: WW531074 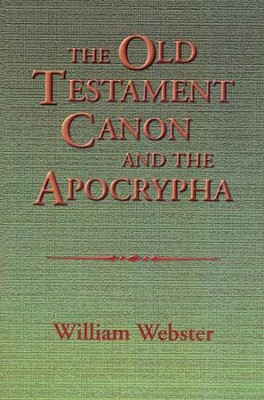 The Old Testament Canon and the Apocrypha

▼▲
The subject of the Old Testament canon has been a matter of debate between Protestants and Roman Catholics for centuries. In the sixteenth century, the Council of Trent officially accorded the Apocrypha canonical status, decreeing it to be inspired Scripture. Roman apologists claim that Trent affirmed what had been the universal practice of the Church beginning with the North African Councils of Hippo and Carthage in the late fourth century. In this work, William Webster documents the history of the Old Testament canon and the Apocrypha from the Jewish age to the Reformation. The historical evidence reveals that the Jews did not accept the Apocryphal writings as part of the inspired corpus of the Old Testament, that many of the early Church fathers, such as Athanasius and Jerome, followed the Jewish canon and rejected the Apocrypha, and that the Church throughout the middle ages, including the period of the Reformation itself, embraced the opinion of Jerome in denying the Apocrypha full canonical status. These writings were considered useful for edification and for reading in the churches but were not considered authoritative for establishing doctrine. This work provides extensive documentation from the writings of many of the most renowned theologians of the Church from the sixth to the sixteenth centuries, much of which has been translated into English for the first time. The evidence is convincing: Trent's decree, rather than affirming the universal practice of the Church, was in fact contrary to it. Contents Include: The Canon of the Jews - Witness of Jesus and the NT; The Structure of the Hebrew Canon; the number of books; the Identity of the Hebrew Canonical books; the Septuagint and the Two Canon theory; The Council of Jamnia; The Essenes; Supposed Citation of the Apocrypha in the NT The Beginning of the Church Age to Jerome - The LXX and the Early Church; The Eastern Church; The Western Church; Jerome; Augustine and the North African Church From Jerome to the Reformation - The Eastern Church; The Western Church; The Glossa Ordinaria; The Teaching of the Major Western Theologians of the Middle Ages; Roman Catholic Bible Translations; Internal Corruption of the Apocrypha Disqualifying the Writings as Being Inspired Conclusion Endnotes of Chapter One, Two and Three, and Index

▼▲
I'm the author/artist and I want to review The Old Testament Canon and the Apocrypha.
Back
Back