Skip to main content
SPRING CYBER EVENT STARTS NOW: And it's a really BIG deal! Up to 88% off through 5/24>
I'll Make You an Offer You Can't Refuse: Insider Business Tips from a Former Mob Boss - eBook
By: Michael Franzese
Stock No: WW16571EB 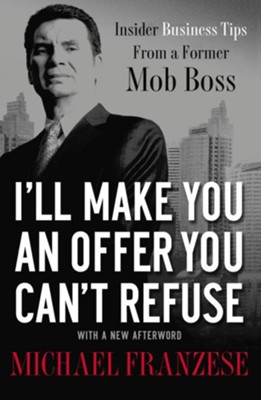 What can a one-time mob boss teach you about how to run a business? I'll Make You an Offer You Can't Refuse, written by a former member of the Colombo crime family, promises an insider's view of the mob that will change the way you do business forever.

The first thing you'll learn? Get a plan, work it hard, be smart, and surround yourself with people who know how to help you reach your goals--people like Michael Franzese.

At the height of his involvement in the mafia, Franzese ran rackets that earned him millions of dollars every week. After serving his time, Franzese quit the mob and dedicated his life to making a positive impact on the world by sharing what he's learned along the way. Now, he's a consultant who has helped everyone from high-powered executives to small business owners learn how to make the most out of their businesses--and, more importantly, how to do it honestly.

As one of the few who quit the mob and lived to tell his story, Franzese has a unique perspective on how the mafia does business. Packed with hard-won experience, street smarts, and just a pinch of philosophy, I'll Make You an Offer You Can't Refuse shares the professional advice (and the life lessons) that Franzese learned firsthand, including:

Business is business. Let your friend Franzese give you a tip or two about how to run yours better.

Michael Franzese was one of the mob's biggest earners since Al Capone, and the youngest individual on Fortune magazine's “Fifty Biggest Mafia Bosses.” Then, after dodging the law for years, Franzese pled guilty, accepted a ten-year prison sentence, and quit the mob.

▼▲
I'm the author/artist and I want to review I'll Make You an Offer You Can't Refuse: Insider Business Tips from a Former Mob Boss - eBook.
Back
Back