Skip to main content
SPRING CYBER EVENT STARTS NOW: And it's a really BIG deal! Up to 88% off through 5/24>
A Long Obedience in the Same Direction: Discipleship in an Instant Society - eBook
By: Eugene H. Peterson
Stock No: WW100935EB 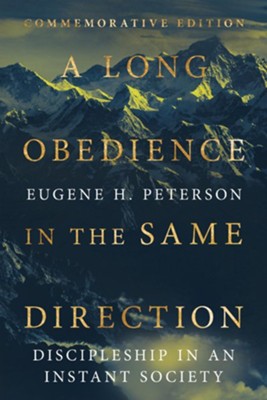 A Long Obedience in the Same Direction: Discipleship in an Instant Society - eBook

▼▲
Since Eugene Peterson first wrote this spiritual formation classic nearly forty years ago, hundreds of thousands of Christians have been inspired by its call to deeper discipleship. As a society, we are still obsessed with the immediate; new technologies have only intensified our quest for the quick fix. But Peterson's time-tested prescription for discipleship remains the same—a long obedience in the same direction. Following Jesus in this way requires a deepening life of prayer, and throughout history Christians have learned to pray from the Psalms. Peterson finds encouragement for today's pilgrims in the Songs of Ascents (Psalms 120-134), sung by travelers on their way to worship in Jerusalem. With his prophetic and pastoral wisdom, Peterson shows how the psalms teach us to grow in worship, service, joy, work, happiness, humility, community, and blessing. This special commemorative edition of A Long Obedience in the Same Direction includes a new preface taken from Leif Peterson's eulogy at his father's memorial service.

▼▲
Eugene H. Peterson (19322018) was a pastor, scholar, author, and poet. He wrote more than thirty books, including his widely acclaimed paraphrase of the Bible, The Message: The Bible in Contemporary Language, his memoir, The Pastor, and numerous works of biblical spiritual formation, including Run with the Horses, also available in a commemorative edition. Peterson was founding pastor of Christ Our King Presbyterian Church in Bel Air, Maryland, where he served for twenty-nine years before retiring in 1991. With degrees from Seattle Pacific, New York Theological Seminary, and Johns Hopkins University, he served as professor of spiritual theology at Regent College in Vancouver, British Columbia, until retiring in Lakeside, Montana, in 2006.

▼▲
I'm the author/artist and I want to review A Long Obedience in the Same Direction: Discipleship in an Instant Society - eBook.
Back
Back