Skip to main content
THE MEGA CHRISTMAS SALE: Save up to 85% off through 10/19 >
Numbers: Volume IV, The Forms of the Old Testament Literature (FOTL)
By: Rolf P. Knierim, George W. Coats
Stock No: WW822314 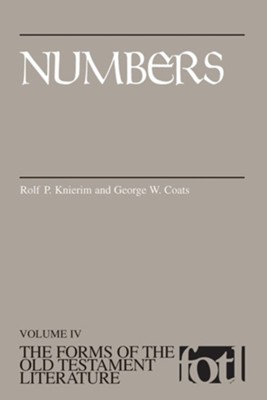 ▼▲
This new commentary on Numbers is not only the latest volume in the respected FOTL series; it is also the first commentary to be written using the exegetical methods of the recently redesigned form-critical approach to the Old Testament literature.

Rolf Knierim and George Coats make clear what has traditionally been a difficult portion of Scripture by showing how form criticism sheds light on the text's structure, genre, setting, and intention. Following an extensive introduction to the historical and social background of Numbers, the commentary proper leads readers unit by unit through the text, highlighting the literary development of Numbers and the meaning that it meant to convey to its audience.

▼▲
Ehud Ben Zvi
"This commentary by Rolf Knierim and George Coats is important in two different but related ways. As a commentary on Numbers it is undoubtedly a substantial contribution to the study of the book. The discussions of the different units, including an extensive treatment of the book as a whole, are insightful and thought-provoking. Students of Numbers are well advised to read this volume. This commentary is also a clear demonstration of the concrete implications of foundational differences between past and present form-critical studies. The commentary is proof positive of the vitality of form criticism and its ability to adapt and develop into a family of multi-faceted approaches. The authors' approach combines some elements of traditional form-criticism with a strong awareness of the book's literary character and of its world, a focus on the shape of the final redaction of Numbers in its Masoretic form, and an understanding that individual and generic text structures represent semantic systems that cannot be understood without taking account of the concepts that generated them. Scholars interested in form-critical approaches as practiced today are also well advised to read this commentary by Knierim and Coats, whether their main interest lies in Numbers, the Pentateuch, or other books in the Hebrew Bible."

Antony F. Cambpell, S.J.
"Rolf Knierim and George Coats recognize that Numbers is a 'literary composite' reflecting 'the convictions of the many generations' responsible for it. Aware of these many generations and the 'seemingly incoherent organization of the work,' they nevertheless pay full attention to the shape and meaning of the present biblical text, the 'final outcome' of the long growth process of Numbers. Much will be learned from this commentary."

Thomas B. Dozeman
"This commentary on Numbers is an admirable addition to the FOTL series. Rolf Knierim and George Coats have succeeded in maintaining the delicate balance of the series between the study of literary forms and the description of the author's social context, which infuses the forms with conceptual and semantic meaning. The result is a commentary both for the literary critic seeking a clear description of the genres in Numbers and for the social historian investigating the cultural forces at work in the formation of the book."

Burke O. Long
"This commentary brings renewed vitality to the classic tasks of form criticism and shrewdly takes account of the changed world in which form critics and the well-known FOTL series now must live. Rolf Knierim and George Coats maintain consistent focus on sociological aspects of literature — the people and societal conditions that generated conceptually and formally structured texts. They precisely describe the literary nature of these texts but at the same time carefully relate literary analysis to the nuanced realities and interests of people who created the written documents. This approach yields fresh insights into structure and genre, rich connections to the history of Israel's religion, and grounded access to theological ideas."

▼▲
I'm the author/artist and I want to review Numbers: Volume IV, The Forms of the Old Testament Literature (FOTL).
Back