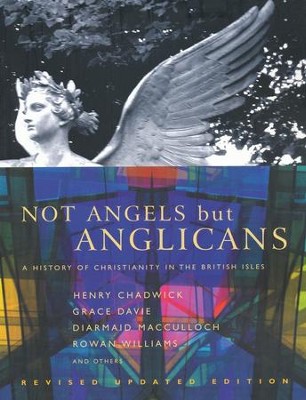 Not Angels but Anglicans

▼▲
A star-studded list of contributors (e.g., Diarmaid MacCulloch, David Edwards, Rowan Williams, Henry Chadwick, John Bowker) covers the days of Augustine of Canterbury to modern dissension within Anglicanism. The gallery of illustrations also helps lift this popular history above many of its competitors. 320 pages, softcover.

▼▲
This title traces the history and development of Christianity in Britain from Roman times through twenty often turbulent centuries. Learned, yet accessible, witty in style and attractively illustrated throughout, this is popular history at its best. When the earlier editions were in print, 9/11 had not happened, Iraq had not been invaded, Rowan Williams was not yet Archbishop of Canterbury. No-one could have foreseen the escalation of religious conflict, how the issue of homosexuality was to dominate the churches' public agenda, that the number of female ordinands would so rapidly outnumber male candidates, or imagined British parish churches rejecting their bishops and looking to Africa for a moral lead. This new edition conveys the character and contribution of Christianity in the ever changing landscape of contemporary Britain.

▼▲
'The book's strengths include its appealing layout, the work of Vera Brice, a collection of illustrations generously spread throughout, and a number of succinct chronological tables. There are lively biographical paragraphs on Lancelot Andrewes, George Herbert, and others ... There are gem-like insights studded through these winding narratives.'

▼▲
I'm the author/artist and I want to review Not Angels but Anglicans.
Back
Back