Skip to main content
Not a Fan: Series
By: Kyle Idleman
Stock No: WW977264 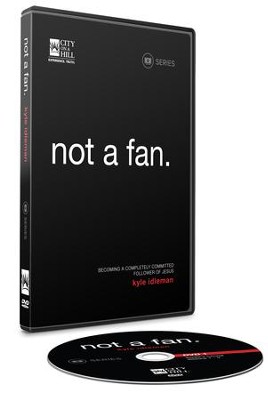 Not a Fan: Series

The study follows the journey of Eric Nelson, a man leading a compartmentalized triple life as a pleasure-seeking rebel, a cutthroat corporate executive, and a nominal Christian. But when confronted with a near death experience, Eric embarks on a spiritual journey that transforms his commitment to Jesus Christ and tests the faith of his friends and family. 6 Episodes, totaling 180 minutes.

This is not a conventional small group experience. It is a cinematic journey, a series of six mini-movies, with the perspective and depth to help shape today’s believer into a first century Christ-follower.

Eric Nelson collapses. Family and friends desperately try to revive him. At a football stadium across town, Pastor KYLE IDLEMAN receives news of Eric’s heart attack. Kyle rushes to the hospital, arriving as Eric’s friends and family are given the devastating news: Eric has lost all brain function. The family makes the painful decision to let Eric go.

The next day, Kyle arrives at the Nelson home to pay his respects and offer pastoral care. As Kyle speaks with friends and family, enigmatic details of Eric’s life emerge. Eric had suffered a mild heart attack five years earlier. The near death experience caused him to completely surrender his life to Jesus. He went from fan to follower and it had a profound impact on those around him. Anna, Eric’s wife, is forced to evaluate what really matters in life. Darren, Eric’s longtime business associate, subtly indicates that their friendship was strained when Eric took a new job. Eric’s father, Bill, disliked the new job and the people with whom Eric worked - and claims his objections were based on Christian principle. Gary, Eric’s friend since High School, alludes to Eric’s dark past and a subsequent transformation.

As Gary examines his own life in the wake of Eric’s death; he recalls their days of pleasure-seeking rebellion. Driven to the brink by a demanding job and an imploding marriage, Eric collapses in Gary’s apartment from a non-fatal heart attack. Convinced he’s received a divine wake-up call that must be answered, Eric is never the same again. Now, devastated by the death of his friend, Gary must decide what path he will take.

From his high-rise office, Darren reflects on Eric’s transformation from cutthroat businessman to compassionate Christ-follower. Darren’s Christian convictions are initially rattled by Eric’s business ethic, but, as Eric coldly explains, “This isn’t church. It’s business.” By the time Eric has a change of heart, Darren has learned to compartmentalize his faith and to view conscience as an obstacle to prosperity. When both men are asked to skirt their stated Christian convictions for the sake of keeping their jobs, Eric courageously follows the way of Christ and Darren walks away sad.

Anna remembers life after Eric recommitted to their marriage and began to take his faith seriously. She quickly finds herself disturbed at how seriously - and stubbornly resists his attempts to scale back their extravagant lifestyle for the sake of helping the less fortunate. After Eric’s ethical stand results in his unemployment, luxurious living is no longer an option. As all her worldly comforts are stripped away, Anna experiences first-hand the tremendous cost of following Jesus Christ.

Bill disapproves of Eric’s new job and his misguided attempts to help “those people” at the expense of providing for his own family. Bill takes particular issue with Lily, a pregnant teenager who has moved in with the Nelsons. Eric’s sister, Kim, suffers a miscarriage and is further devastated when Bill suggests the tragedy is the result of sin in her life. Enraged, Eric confronts his father about his merciless self-righteousness. Days later, Eric offers the olive branch and tells Bill he loves him. Bill is silent. Minutes later, Bill and family watch in horror as Eric suffers his fatal heart attack.

As Natalie prepares for her father’s funeral, she remembers serving with him at his new job-a homeless shelter. When she grows increasingly resentful at the work and the ingratitude of a belligerent young female resident, Eric makes the painful decision to bar Natalie from volunteering. Natalie defiantly returns determined to prove that she, like her father, is genuine and willing to make painful sacrifices for her faith. Eric tells her that what separates the genuine from the fake is not dutiful sacrifice, but love. Natalie apologizes to the testy resident, who turns out to be Lily. After the funeral, the Nelson family is profoundly moved at the effect Eric’s life had on so many people. Natalie and Anna agree that Eric truly led an abundant life, and they want to do the same.

▼▲
I'm the author/artist and I want to review Not a Fan: Series.
Back
Back