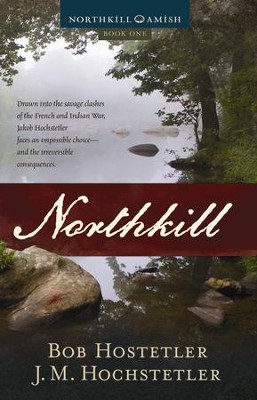 A fictional account closely based on the true story ofJakob Hochstetler and his family, well-known among Amish and Mennonites, who immigrated to this country in early 1738, seeking sanctuary from religious persecution and the freedom to live and worship according to their Anabaptist beliefs. By early 1739 they had settled with other members of their church in the Northkill Amish Mennonite community at the base of the Blue Mountains, near Northkill Creek, for which their community was named. Eighteen years later during the French and Indian War, on the night of September 19-20, 1757, their lives were forever changed when their home was attacked by a war party of Delaware and Shawnee. Three members of the family were killed, and Jakob and two of his sons were carried into captivity among the Indians.

▼▲
In 1738 Jakob Hochstetler and his family immigrate to America, seeking sanctuary from religious persecution in Europe and the freedom to live and worship according to their nonresistant Anabaptist beliefs. Along with other members of their church, they settle in the Northkill Amish Mennonite community at the base of the Blue Mountains, on the frontier between white and Indian territory. They build a home near Northkill Creek, for which their community is named. For eighteen years, the community lives at peace with its Indian neighbors. Then while the French and Indian War rages, the Hochstetlers' way of life is brutally shattered. On the night of September 19-20, 1757, their home is attacked by a war party of Delaware and Shawnee Indians allied with the French. Facing almost certain death with his wife and children, Jakob makes a wrenching decision that will tear apart his family and change all of their lives forever. Northkill is closely based on an inspiring true story well-known among the Amish and Mennonites. It has been documented in many publications and in contemporary accounts preserved in the Pennsylvania State Archives and in private collections.

▼▲
I'm the author/artist and I want to review Northkill #1.
Back
Back