Nobody Told Me: What You Need to Know About the Physical and Emotional Consequences of Sex Outside of Marriage - eBook
By: Pam Stenzel, Melissa Nesdahl 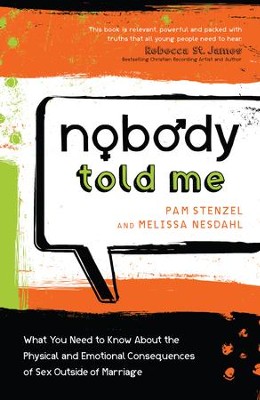 Nobody Told Me: What You Need to Know About the Physical and Emotional Consequences of Sex Outside of Marriage - eBook

▼▲
Teens have their whole lives ahead of them, but making poor choices can undermine their hopes for a bright future. Too many young adults look back on decisions they made in the heat of the moment and regret the path they chose--they wish someone had told them how premarital sex could negatively impact their future relationships. Here is a book to help teens make the right choices when it comes to sex, based on actual questions the author has received from real-life teens.

Nobody Told Me is written for young men and women who want passionate, long-lasting marriages in the future but haven't considered how the decisions they make now impact their chances for fulfillment. This accessible book contains information teens need about the physical, emotional, and spiritual risks associated with premarital sex, as well as guidelines for making healthy choices. Teens have questions about sex, and now there is somewhere to find the answers.

▼▲
Pam Stenzel is the founder of Enlighten Communications, an organization that empowers parents, youth leaders, and educators to lead informed discussions on sexual abstinence and its benefits. She speaks to over 500,000 teens a year. Sex Has a Price Tag, developed and produced by Pam, has won numerous awards and has been translated into eleven languages. Pam has appeared on FOX News, The Dr. Laura Show, The 700 Club, and Politically Incorrect with Bill Maher.

Melissa Nesdahl began work with Enlighten Communications in 2003, the same year she completed a Masters of Arts in Biomedical Ethics. She wrote the leader's guide for Pam Stenzel's Love Lessons: Purity is Possible series and has authored publications in the Chicago Tribune, Kyria, and SUSIE Magazine.

▼▲
I'm the author/artist and I want to review Nobody Told Me: What You Need to Know About the Physical and Emotional Consequences of Sex Outside of Marriage - eBook.
Back
×
Back
×