Skip to main content
Get Christmas Ready Sale: Deals on over 1,150 titles thru 9/27.
Noah Webster, Sower Series
By: David Collins
Stock No: WW91424 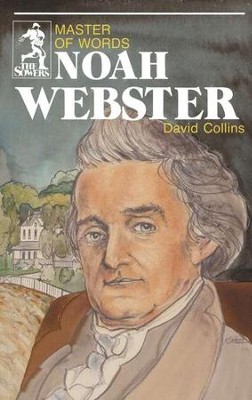 ▼▲
As a boy, Noah was fascinated with language and education. He was troubled by the lack of interest shown by others in formal schooling, and the lack of books and proper facilities bothered him even more. When the fires of the Revolution broke out in the early 1770's, Noah was a student at Yale. Young and impressionable, he was singed by the flames of patriotism. He longed for a chance to join liberty's cause. He wrote down his thoughts about freedom and government, sharing them with leaders who would put together the United States Constitution. Many of his ideas were incorporated into the document. But more than a spokesman for democratic government, Noah Webster was a champion for youth and education. He knew what books needed to be written, wrote them, and fought for their acceptance within the school framework. Today, Webster is with us still. But he merits a place of honor beyond a name stamped on dictionaries around the world. He was a man who served his fellow man and his country with unselfish devotion. More importantly, he served his God with faith and love. For ages 9 to 13.

▼▲
I'm the author/artist and I want to review Noah Webster, Sower Series.
Back