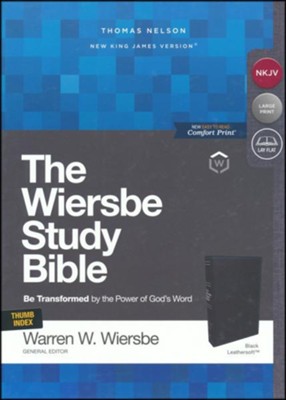 Dr. Wiersbe's top-quality Scriptural instruction is now available all in one place with The NKJV Wiersbe Study Bible! Dr. Wiersbe has impacted millions of people with God's Word through his "Back to the Bible" radio ministry, and insightful "Be Series" commentaries. Now the wealth of Dr. Wiersbe's solid Biblical guidance is presented as helpful commentary alongside the text of the Bible itself. Grow deeper in your knowledge of God's Word with The NKJV Wiersbe Study Bible.

Dr. Wiersbe was the former pastor of the Moody Memorial Church in Chicago and general director of the Back to the Bible radio broadcast for 10 years. He was also awarded a Gold Medallion Lifetime Achievement Award by the Evangelical Christian Publishers Association.

Now you can experience Dr. Warren Wiersbe’s lifetime of powerful Bible teaching in one place. Whether through his bestselling "BE Series" commentaries or his popular "Back to the Bible" radio ministry, Dr. Wiersbe has guided millions into a life-transforming encounter with God’s Word. Now, in this single volume, you have access to Dr. Wiersbe’s trustworthy, accessible explanations of the Bible’s truths and promises, through his comprehensive system of study and application notes. Make the most of your time reading, studying, and reflecting on Scripture with The Wiersbe Study Bible.

▼▲
I'm the author/artist and I want to review NKJV, Wiersbe Study Bible, Leathersoft, Black, Indexed, Comfort Print.
Back
×
Back
×