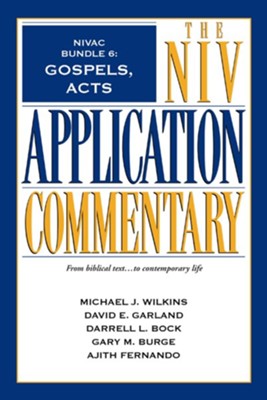 To bring the ancient messages of the Bible into today's world, each passage is treated in three sections:

This unique, award-winning commentary is the ideal resource for today's preachers, teachers, and serious students of the Bible, giving them the tools, ideas, and insights they need to communicate God's Word with the same powerful impact it had when it was first written.

Michael J. Wilkins (PhD, Fuller Theological Seminary) is dean of the faculty and professor of New Testament language and literature at Talbot School of Theology, Biola University, and the author of several books.

Darrell L. Bock (PhD, University of Aberdeen) is senior research professor of New Testament studies and Executive Director for Cultural Engagement at Dallas Theological Seminary. Known for his work in Luke-Acts, Dr. Bock is a Humboldt Scholar (Tubingen University in Germany), is on the editorial board for Christianity Today, and a past president of the Evangelical Theological Society (2000-2001). A New York Times bestselling author, Bock has written over forty books, including Luke in the NIV Application Commentary series.

Gary M. Burge (PhD, King's College, Aberdeen University) is visiting professor of New Testament at Calvin Theological Seminary. Gary has authored a number of books, including Who Are God’s People in the Middle East? What Christians Are Not Being Told About Israel and the Palestinians; John and Letters of John in the NIV Application Commentary series; The New Testament in Antiquity (coauthored with Gene Green); and the first three volumes in the Ancient Context, Ancient Faith series: The Bible and the Land, Jesus, the Middle Eastern Storyteller, and Encounters with Jesus. Gary specializes in the Middle East, its churches, and its history in the Hellenistic period.

Ajith Fernando (ThM, DD) served for thirty-five years as the National Director of Youth for Christ in Sri Lanka and now serves as its Teaching Director.  He is a Bible expositor with a worldwide ministry. Ajith studied at Asbury Theological Seminary and Fuller Seminary and spends much of his time mentoring and counseling Christian workers.  He is a visiting lecturer at Colombo Theological Seminary.

▼▲
I'm the author/artist and I want to review NIVAC Bundle 6: Gospels, Acts - eBook.
Back
Back