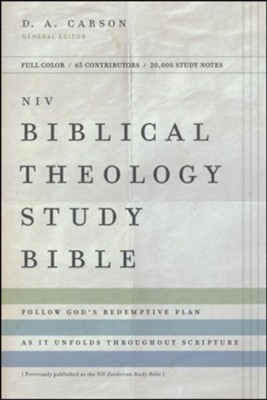 Discover how the details of Scripture come together to form God's grand narrative of redemption! The NIV Biblical Theology Study Bible is an excellent resource for those seeking to understand the individual parts of Scripture, and how those parts join to create a cohesive whole. Deepen your knowledge of God's Word with insightful book introductions, sectional introductions, and 20,000 study notes written by a team of over 60 trusted theologians and Bible scholars explaining specific verses and themes.

Marvel at the big story and savor each detail

Biblical Theology allows you to ponder the individual stories and themes of Scripture while observing how they all fit together in God’s grand biblical narrative. It answers the question, How has God revealed his word historically and organically? Biblical Theology studies the theology of individual biblical books and select collections within the Bible and then traces out themes as they develop across time within the canon.

With three articles introducing Biblical theology and 25 articles unpacking key themes of Scripture, the NIV Biblical Theology Study Bible equips you to follow the progressive unfolding of God’s story. Helpful introductions to books and sections of the Bible combined with 20,000 verse-by-verse study notes will guide you to a clearer understanding of every portion of Scripture.

Andrew David Naselli (PhD, Bob Jones University; PhD, Trinity Evangelical Divinity School) is research manager for D. A. Carson and administrator of the journal Themelios. He has taught New Testament Greek at the undergraduate and graduate levels, and he currently teaches exegesis and theology as adjunct faculty at several seminaries.

▼▲
I'm the author/artist and I want to review NIV Biblical Theology Study Bible, Hardcover, Comfort Print.
Back
Back