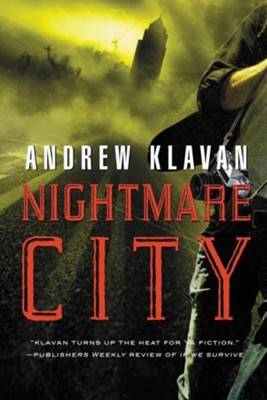 ▼▲
Teen newspaper reporter Tom Harding is pursuing the greatest story of his career when suddenly things get very weird. He wakes up to find his house empty---and soon realizes that the whole town is being swallowed by an eerie creeping fog. Is he dreaming? Is it a zombie apocalypse? He has only hours to find out! 320 pages, hardcover from Nelson.

What should have been an ordinary morning is about to spiral into a day of unrelenting terror.

As a reporter for his high school newspaper, Tom is always on the lookout for an offbeat story. But from the moment he woke up this morning, his own life has been more bizarre than any headline could ever tell.

The streets of his town are suddenly empty and silent. A strange fog has drifted in from the sea and hangs over everything. And something is moving in that fog. Something evil. Something hungry. Closing in on Tom.

Tom’s terrified girlfriend Marie says the answers lie at the Santa Maria Monastery, a haunted ruin standing amidst a forest blackened by wildfire. But can he trust her? A voice that seems to be coming from beyond the grave is warning him that nothing is what it seems.

Only one thing is certain: with his world collapsing around him, Tom has only a few hours to recover the life he knew—before he, too, is lost forever in this nightmare city.

Andrew Klavan is an award-winning writer, screenwriter, and media commentator. An internationally bestselling novelist and two-time Edgar Award-winner, Klavan is also a contributing editor to City Journal, the magazine of the Manhattan Institute, and the host of a popular podcast on DailyWire.com, The Andrew Klavan Show. His essays and op-eds on politics, religion, movies, and literature have appeared in the Wall Street Journal, the New York Times, the Washington Post, the LA Times, and elsewhere.

▼▲
'...Klavan’s background in thrillers comes to the forefront, and the mysterious clues lead to elegant, intense chase sequences and a well-crafted mystery.' -- Publishers Weekly

'Klavan again hits readers with a story filled with such vivid imagery that one might find themselves looking over their shoulder to make sure they aren’t the one being followed. The story-set partly in reality and partly somewhere else-grabs the reader from the first page and makes one wonder what could possibly happen next. The writing is stellar, and readers who love Klavan’s previous works will not be disappointed with Nightmare City.” -- RT Book Reviews

“Klavan retains his James Patterson–like gift for keeping pages turning, and the mystery behind it all---having to do with Tom’s school-newspaper exposé on the performance-enhancing drug use of the football team---is a juicy one, and well handled.” -- Booklist

▼▲
I'm the author/artist and I want to review Nightmare City.
Back
Back