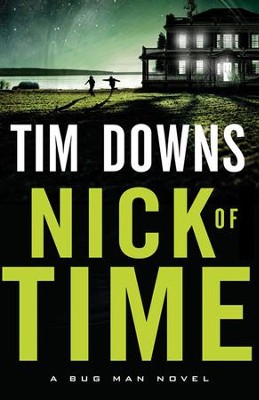 ▼▲
Tying the knot may be the toughest thing Nick Polchak has ever tried to do. Nick Polchak is comfortable with bugs. Their world is orderly. He knows where he stands and exactly how to interpret the signs they give him. But a fiancie and an upcoming wedding? Not so much.

That's why-a mere four days before the nuptials-Nick finds himself driving to Philadelphia for the monthly meeting of the Vidocq society. Being among a group of forensic professionals consulting on cold cases will surely allow him to feel useful and normal.

But while there he discovers that a close friend has been murdered . . . and in classic Nick style, begins to follow the trail of evidence rather than returning to his fiancie. Fearing that his one-track mind won't lead him home by Saturday, Alena and three of her dogs go to track him down. When she finally finds him, nothing is as Alena expected . . . because the twists in this case will surprise even the most dedicated Bug Man fans.

The Bug Man is getting married on Saturday  . . . if his fianc&eacute;e can find him.

But Nick has finally found a woman as strange as he is—dog trainer Alena Savard, a woman who is odd, reclusive, and can seemingly talk to animals. It was a match made in heaven.

Nick and Alena are scheduled to be married on Saturday—but there's one small problem. Nick has disappeared.

Caught up in a murder case involving an old friend, Nick finds himself on a manhunt that's drawing him farther and farther from the church where Alena is waiting. But will he make it back in time? Could Nick's single-minded focus cause him to forget his own wedding? Is he really pursuing a killer, or is he running away from something else?

Tim Downs is the author of nine novels including the Christy Award-winning PlagueMaker and the highly acclaimed series of Bug Man novels. Tim lives in North Carolina with his wife Joy. They have three grown children.

▼▲
You've got to love the obnoxious, wise-cracking supersleuth Nick Polchak. This installment is full of his singular humor, bug facts, mystery and marriage advice. This book stands alone, but if you want to fully appreciate Nick and Alena's story, read First the Dead, and Ends of the Earth first. - Four Stars, Romantic Times

▼▲
"Bug Man" Nick Polchak is at it again in this thriller that will have readers guessing if he can solve the crime and make his nuptials. Nick is only a few days away from marrying his fiancée, Alena, but he insists on driving to Philadelphia to make his monthly Vidocq Society meeting of forensics professionals. Wanting to catch up with his friend and fellow forensic scientist Pete Boudreau, Nick reaches the city of Brotherly Love, only to find out that his friend has been murdered. Not one to leave a case to the cops, Nick sets out on his own and winds up in the Poconos, looking for a man that Pete supposedly worked with not long before his death. As the bodies pile up, Nick starts to suspect everyone he meets. Complicating matters, his stranded fiancée launches an investigation of her own to figure out Nick's whereabouts. But neither of them is prepared to discover what they find. Downs (Wonders Never Cease) crafts a fast-paced winner that surely will delight fans of the series. The quirky characters--especially Nick with his savantlike etymological knowledge--prevent the novel from being formulaic or predictable. It's up to readers to figure out the unconventional clues. (May) Copyright 2011 Reed Business Information.

▼▲
I'm the author/artist and I want to review Nick of Time, A Bug Man Series #6.
Back
Back