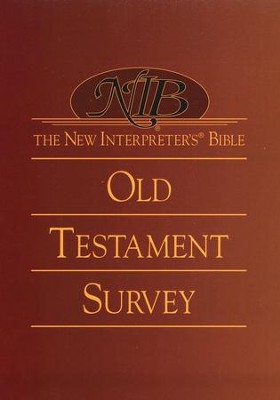 ▼▲
This survey is written by a diverse group of male and female biblical scholars from various denominational, racial and ethnic backgrounds. It provides introductory content for each book of the Old Testament and Apocrypha, and includes articles that treat historical, socio-cultural, literary, and theological issues. Helpful maps, charts and outlines as well as the Hebrew, Aramaic, and Greek along with transliterations and translations for key points are included for the student who wishes to delve deeper. This volume is based on the introductory materials found in the New Interpreter's Bible series.

▼▲
Walter Brueggemann is William Marcellus McPheeters Professor Emeritus of Old Testament at Columbia Theological Seminary. A past president of the Society of Biblical Literature, he is one of today's preeminent interpreters of Scripture. Eileen Schuller is a professor in the Department of Religious Studies at McMaster University, with a special focus on the Dead Sea Scrolls, Apocrypha and Pseudepigrapha, and topics related to the women in the period. Since the early 1980s, she has been involved in the edition and publication of the Dead Sea Scrolls. She was assigned a section of texts that belong to the "prayers and psalms" category. Her contributions to the official series Discoveries in the Judaean Desert (Oxford Press) include Non-Canonical Psalms, 4Q380 and 4Q381, DJD XI (1998); the Cave 4 Hodayot, 4Q427-432, and Hodayot-Like A, B, C, 4Q433, 433a, 440, DJD XIX (1999); Narrative and Psalm Work a,b,c, 4Q371-373, DJD XXXVIII (2001; with Moshe Bernstein). In addition, Professor Schuller was an Associate Editor for the recent publication by Oxford Press of a two-volume Encyclopedia of the Dead Sea Scrolls.

▼▲
I'm the author/artist and I want to review The New Interpreter's Bible Old Testament Survey.
Back
Back