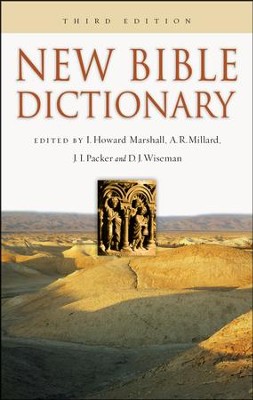 ▼▲
This updated, third edition of the New Bible Dictionary is a reference work ideally suited for people of all ages and backgrounds. Trusted for over 50 years, it now includes the latest research in biblical studies, ancient Near Eastern studies, and archaeological finds. One hundred of the most important articles have been revised and rewritten. All of the bibliographies have been revised, taking into account the vast increase in publications since the second edition was released. Also included is essential background information on the history, geography, and customs of Israel and its Middle Eastern neighbors.

The New Bible Dictionary will increase your knowledge and understanding of God's Word. It's a great reference book for schools and colleges, theological and Bible college students, ministers and laypeople, teachers and professional scholars--everyone who wants to know and understand the Bible better.

The New Bible Dictionary is a reference work ideally suited for people of all ages and backgrounds. This magnificent and comprehensive Bible dictionary has set the standard for evangelical Bible dictionaries for five decades. Now in its third edition, it is the clear leader in its field. The third edition of the New Bible Dictionary will increase the reader's knowledge and understanding of God's Word as no other single book can do. This up-to-date edition is filled with the latest developments in biblical studies, ancient Near Eastern studies, and archaeological finds. This is an invaluable reference book for schools and colleges, theological and Bible college students, ministers and laypeople, teachers and professional scholars—everyone who wants to know and understand the Bible better.

I. Howard Marshall (1934-2015) was a world-renowned New Testament scholar and the author or editor of at least thirty-eight books and more than 120 essays and articles. He taught New Testament at the University of Aberdeen for thirty-five years and was a professor emeritus for sixteen years. Among his numerous publications on the New Testament are his commentaries on the Gospel of Luke, Acts, 1-2 Thessalonians, the Pastoral Epistles and 1 Peter and 1-3 John. He is coauthor of Exploring the New Testament: A Guide to the Letters and Revelation and coeditor of the New International Greek Testament Commentary series, as well as the author of the series' volume on Luke. He has also authored New Testament Theology: Many Witnesses, One Gospel. Marshall was an evangelical Methodist who was born and lived most of his life in Scotland. He received a PhD from the University of Aberdeen and a DD from Asbury Theological Seminary.


Alan Millard is Rankin Professor of Hebrew and Ancient Semitic Languages at the University of Liverpool. He is the author of many articles and books as well as coeditor of the Dictionary of the Ancient Near East (British Museum Press) and a consulting editor for the New Bible Dictionary (IVP).


Donald J. Wiseman (1918–2010) was emeritus professor of Assyriology at the University of London in England.

"The text is clearly written, up to date, cognizant of critical theories, yet true to the Bible as God's Word and replete with helpful information. This work is destined to become a standard that will be turned to often by students and ministers alike."

Q: What Bible translation is this based on?

This dictionary is not based on a particular translation, it is based on the original Greek or Hebrew.

▼▲
I'm the author/artist and I want to review New Bible Dictionary, Third Edition.
Back
Back