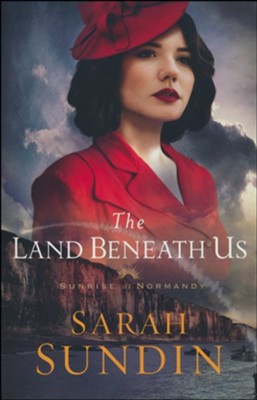 The Land Beneath Us #3

With his future stolen by his brothers' betrayal and the Allied invasion of France looming, Private Clay Paxton trains hard with the US Army Rangers at Camp Forrest, Tennessee, though all the while believing his fate is to die in battle.

Growing up in an orphanage, Leah Jones longs to rise above her lonely upbringing and find a place to belong. With a job as a librarian at Camp Forrest, she uses her spare time to search for her real family-the baby sisters she was seperated from so long ago.

After Clay saves Leah's life from a brutal attack, he also rescues her virtue by offering her a marriage of convenience. But can their new relationship withstand the trails of grudges, foreboding dreams, and D-day?

▼▲
In 1943, Private Clay Paxton trains hard with the US Army Rangers at Camp Forrest, Tennessee, determined to do his best in the upcoming Allied invasion of France. With his future stolen by his brothers' betrayal, Clay has only one thing to live for--fulfilling the recurring dream of his death.

Leah Jones works as a librarian at Camp Forrest, longing to rise above her orphanage upbringing and belong to the community, even as she uses her spare time to search for her real family--the baby sisters she was separated from so long ago.

After Clay saves Leah's life from a brutal attack, he saves her virtue with a marriage of convenience. When he ships out to train in England for D-day, their letters bind them together over the distance. But can a love strong enough to overcome death grow between them before Clay's recurring dream comes true?

▼▲
Sarah Sundin is the bestselling author of several popular WWII series, including Sunrise at Normandy, Waves of Freedom, Wings of the Nightingale, and Wings of Glory. Her novels have received starred reviews from Booklist, Library Journal, and Publishers Weekly. The Sky Above Us received the Carol Award, her bestselling The Sea Before Us received the FHL Reader's Choice Award, and both Through Waters Deep and When Tides Turn were named on Booklist's "101 Best Romance Novels of the Last 10 Years." Sarah lives in Northern California. Visit www.sarahsundin.com for more information.

Can you please tell us about your newest book, The Land Beneath Us?
The first novel in the Sunrise at Normandy series, The Sea Before Us, looked at D-day from the sea through the eyes of US naval officer Lt. Wyatt Paxton and British “Wren” Second Officer Dorothy Fairfax. In The Sky Above Us, we saw D-day from the air as Lt. Adler Paxton flew his P-51 Mustang fighter plane—and while Red Cross worker Violet Lindstrom served the airmen. Now in The Land Beneath Us, we meet Private Clay Paxton, an Army Ranger wronged by both brothers, and librarian Leah Jones, an orphan searching for her long-lost sisters. We’ll also see another side of the Paxton family and the tragedies that tore them apart and destroyed Clay’s dreams. Clay’s forgiveness is the key to his family’s reconciliation, but is it too much to ask?

Why did you pick D-day as the specific event that connects all three brothers together?
D-day is one of the events of World War II that has most captured the public imagination. The stories that have come out of that day are both harrowing and inspiring, rich material for a novelist. Also, the more I read about D-day, the more impressed I am at how big it was—from the planning, to events on the sea, in the air, and on the ground. I wanted to write a series to show both the immensity and the deeply personal nature of this pivotal event of modern history.

What type of research was required to write The Land Beneath Us?
Each book takes me in new research directions, which I love. For this novel, I read multiple accounts of the 2nd Ranger Battalion and the ground operations on D-day. Since Leah is a librarian, I learned about bookish aspects of the war, such as the Victory Book Campaign. Probably the most fun research for me was visiting England, Pointe du Hoc, and Tullahoma, Tennessee. I love walking where my characters walk.

The hero is a US Army Ranger. Why did you choose this profession for him?
On my first trip to Normandy, I was fascinated by Pointe du Hoc and the story of the 2nd Ranger Battalion, which scaled those high cliffs on D-day. The Ranger battalions were established in World War II as elite units of highly trained men, taught to be innovative and flexible, and it was fascinating to learn about their feats!

Your series books usually take place chronologically, but each of the Paxton brothers’ stories occurs simultaneously. Why did you decide to write the series in this particular manner?
This was a unique—and fun—challenge! I wanted to have each brother’s story culminate on D-day, one on the sea, one in the air, and one on the ground, which required simultaneous stories. However, letters between the brothers would have served as spoilers for the later books in the series. But if the brothers
were estranged and not communicating, it would work. This gave me an overarching theme of forgiveness and reconciliation to tie the series together. I have enjoyed exploring this theme from multiple angles.

What do you hope readers can learn from your novel?
Clay Paxton has been betrayed by both brothers, and he feels like the biblical Joseph, cast into a dismal pit with nothing to live for. His story raises a difficult question—how do you forgive the unforgivable? And what does real forgiveness actually look like? I learned a lot along with Clay.
Leah Jones is an orphan who only knows abandonment and rejection. More than anything, she wants family. She wants to belong. In our fractured society, many people feel as lonely and disconnected as Leah does, and I hope her journey is comforting and inspiring.

What are you working on next?
I am very excited about my next novel, which is set in Nazi Germany in 1938, before World War II actually begins. Evelyn Brand is an American correspondent in Munich, determined to expose Nazi oppression. Peter Lang, an American doctoral student disillusioned by the chaos in the world, is impressed by the order and prosperity he sees in Germany. But when brutality hits close, Peter is shaken and begins passing information from his Nazi friends to Evelyn. As tensions rise and war looms, dangers erupt for Peter and Evelyn. Can they learn to trust each other before their world shatters?

▼▲
I'm the author/artist and I want to review The Land Beneath Us #3.
Back
Back