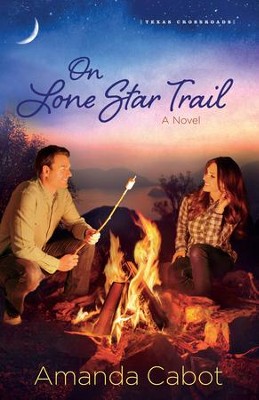 On Lone Star Trail # 3 in the Texas Crossroads series, by Amanda Cabot

Gillian Hodge had plans to become a concert painist.  A motorcyclist put a stop to that dream.  Now another motorcyclist crashes his bike in front of her.  TJ Benjamin feeling lost in his life and faith after the death of his wife.  He wonders about God's sense of humor when he meets Gillian, his rescuer. Will he learn to forget his past?

▼▲
If there's one thing Gillian Hodge never wants to see again, it's a man on a motorcycle. Her last encounter with one left her right hand crushed, ending her promising career as a concert pianist. But as she heads to Rainbow's End Resort, a sudden thunderstorm causes a motorcycle to crash in front of her.

When TJ Benjamin's wife died, he lost more than his best friend; he lost his faith. He's spent the past year wandering the country on a motorcycle, trying not to think about his future. When he finds himself stranded with a busted bike and a reluctant rescuer, he has to wonder about God's sense of humor.

Can this woman without a future and this man running from his past find romance in the present? Or are they too tied to the way life used to be?

▼▲
Amanda Cabot is the bestselling author of the Texas Dreams series, the Westward Winds series, Christmas Roses, At Bluebonnet Lake, and In Firefly Valley. Her books have been finalists for the ACFW Carol Awards and the Booksellers' Best. She lives in Wyoming. Learn more at www.amandacabot.com.

▼▲
I'm the author/artist and I want to review #3: On Lone Star Trail.
Back