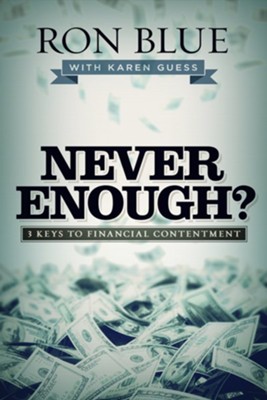 ▼▲
When money's tight, choosing how best to spend it isn't easy. Do you discharge your debt or splurge on a family vacation? Should you give to charity or pay for your kids' tuition? Offering biblical wisdom and practical applications, Blue shares three basic principles to help you navigate financial matters---and keep your dreams and plans intact. 192 pages, softcover from B&H.

▼▲
Have you ever worried that doubling down on your debt repayment is robbing your family of memories and fun? Or had a major appliance fail, right after splurging on an expensive purchase or vacation? The tension between giving to church or charity and paying for your kids’ tuition or sports equipment is real.

Money and life are inextricably linked. They don’t run on independent tracks but rather continually exist together, both of them somehow needing to be handled with steady applications of wisdom and biblical integrity, even when they seem in direct competition.

Veteran financial counselor and trusted author Ron Blue helps you navigate the seeming incompatibilities of money management. His liberating, simplifying analysis breaks down all your financial options to a basic four, then shows you how to adeptly keep them spinning alongside each other without leaving you consumed by confusion or regret—in fact, with all your dreams, plans, and principles still intact.

▼▲
After spending his early career on Wall Street and as an entrepreneur, Ron Blue became a Christian in his early 30s. Since 1979, he has held a God given passion to help Christians plan and manage their finances in order to be able to maximize Kingdom giving. Over time, Ron has pursued this passion in several ways. He is the founder of Ronald Blue & Co., the largest fee-only Christian financial planning firm in the country. He has authored twenty books on biblical financial stewardship, including Master Your Money, The Complete Guide to Faith Based Family Finances, and Surviving Financial Meltdown. In 2003, he helped to establish Kingdom Advisors, a ministry that trains financial advisors to integrate biblical wisdom into their client advice. In 2012, Ron partnered with Indiana Wesleyan University to establish The Ron Blue Institute for Financial Planning, dedicated to multiplying the message of biblical financial wisdom in the public and academic sectors through curriculum development and thought leadership.

Ron holds a BS and an MBA from Indiana University. He and his wife Judy live in Atlanta, Georgia. They have five children and thirteen grandchildren.

Karen Guess is an educator and writer. She graduated with a B.A. in History from Wake Forest University and spent the next twelve years teaching middle and high school in Japan, inner city Richmond, and suburban Atlanta. For the last eight years, she has worked closely with her father, Ron Blue, both editing and creating content for Kingdom Advisors and The Ron Blue Institute. This is their first book together. Karen and her husband have three children and reside in Clarkston, Georgia, a city that is home to several thousand refugees from all over the world. They are passionate about neighboring in their community and sharing its beauty with others.

▼▲
I'm the author/artist and I want to review Never Enough? 3 Keys to Financial Contentment.
Back
Back