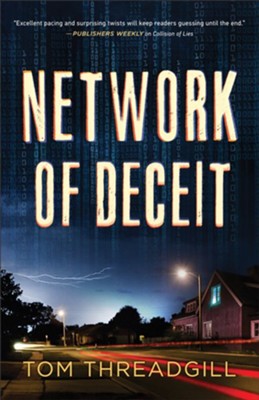 ▼▲
Rescuing 50 kidnapped kids earned Amara Alvarez the transfer she sought---to San Antonio's homicide division. But her first case plunges her into the world of computer hackers, and her personal life is under attack as she's cyber-stalked by the killer. Can she utilize unconventional methods to solve the crime, or will she become a cold case? 384 pages, softcover from Revell.

▼▲
After her rescue of nearly fifty kidnapped children made international headlines, Amara Alvarez gets what she's worked for: a transfer to San Antonio's Homicide Division. Reality sets in quickly, though, as her first case, the suspicious death of a teenager at a crowded local water park, brings chaos to her personal life.

As the investigation moves forward and she increases the pressure on the suspects, Amara finds herself under attack by cybercriminals. Her every move is being potentially watched online, and she's forced to resort to unconventional methods to find the killer. With few leads, she fights to keep her first murder investigation from ending up in the cold case files.

Tom Threadgill is back with another riveting page-turner featuring the detective who is willing to put everything on the line to see that justice is served and lives are protected.

▼▲
Tom Threadgill is a full-time author and a member of American Christian Fiction Writers (ACFW) and the International Thriller Writers (ITW). The author of Collision of Lies, Tom lives with his wife near Dallas, Texas. Learn more at www.tomthreadgill.com.

▼▲
I'm the author/artist and I want to review Network of Deceit.
Back