Neighbors and Wise Men: Sacred Encounters in a Portland Pub and Other Unexpected Places - eBook
By: Tony Kriz
Stock No: WW26262EB 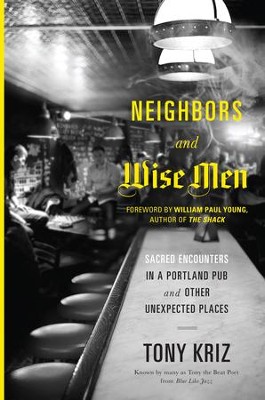 Neighbors and Wise Men: Sacred Encounters in a Portland Pub and Other Unexpected Places - eBook

By: Tony Kriz
Thomas Nelson / 2012 / ePub
4.5 out of 5 stars for Neighbors and Wise Men: Sacred Encounters in a Portland Pub and Other Unexpected Places - eBook (5 Reviews) Write a Review
In Stock
Stock No: WW26262EB

▼▲
Hearing from God is extraordinary. But the circumstances He uses to reveal Himself may be more ordinary than we think.

Neighbors and Wise Men introduces captivating dialogues and unexpected moments with God that go beyond the confines of a conventional religious system and offer the chance for powerful life transformation.

Get to know Tony Kriz (known by many as "Tony the Beat Poet" in Donald Miller's best-selling book Blue Like Jazz) through his real-life conversations and experiences that prove that God can and will use anyone and anything— from Muslim lands to antireligious academics to post-Christian cultures—to make Himself known.

Through his own prodigal-son backstory and return to faith, Tony presents biblical truth in a conversational, but bold light that offers readers the courage to open their eyes to the unlikely encounters that are all around us every day; chance run-ins that turn out to be anything but chance.

Have we limited God's ability to speak in our world today? Have we relegated God's creative voice to the select persons who share our particular religious system? Kriz himself felt like he was falling out of faith until non-Christians encouraged him to "fall toward Christ."

Tell us a little about yourself.  Tony Kriz has an earned doctorate in spiritual formation. He is a teacher of faith and culture through the mass media, via social media, and at universities, conferences, and communities of faith.

Tony has served with a variety of international organizations, living much of that time in Eastern Europe ministering with Muslims in Albania and loving a war-torn former Yugoslavia.

Many were first introduced to Tony under the moniker Tony the Beat Poet. He lived for a season alongside the radically liberal campus of Reed College in Portland; some of his exploits were first described in Donald Millers best-selling book Blue Like Jazz.

Today, Tony journeys with a community of life-servants among some of Portlands most culturally diverse neighborhoods and lives in submission to a multiracial gathering of Jesus-followers. He is giving his time to transforming urban missions: nurturing the Parish Collective network, integrating a holistic gospel-life, and serving as coach/consultant for church planters from diverse traditions.

Tony lives with his wife, Aimee, and their three sons (Malachi, Hudson, and Tristan) in an intentional community of faith. Together they have been foundational participants of several spiritual communities that serve the disillusioned, artistic, and dramatically post-Christian cultures of east Portland.

What was your motivation behind this project?  For eight years I have been asked when I was going to pen a book under my own name, by publishers, agents and ministry leaders. Millions of people have read Donald Millers books and are waiting to hear from Tony the Beat Poet. Now is the time. And I have found a book I believe is worth writing.

What do you hope folks will gain from this project?  One of the most often stated issues with Christianity is its unsatisfying answer to the question about those outside the faith. We have all known people who are kinder than most Christians, purer than most Christians, seemingly more connected to God than most Christians and spiritually wise. This book will give narrative language to this inter-faith dialogue. It will provide this narrative through the approachable language of personal story and through a voice of one who is unapologetically dedicated to Jesus and the orthodox Christian faith.

How were you personally impacted by working on this project?  These stories are sacred to me. Returning to these dear friends and formative moments was a trying and transformative experience.

Who are your influences, sources of inspiration or favorite authors / artists?  If you read the book, every chapter will introduce you to those who have influenced, inspired and impacted me.

Anything else you'd like readers / listeners to know:  The purpose of this book is to point each reader to the beauty of God, who is a free communicator, appearing in and through the lives of neighbors and wise men, who currently exist all around us.