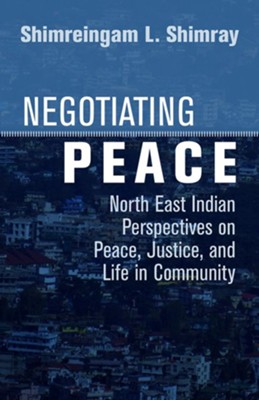 In Negotiating Peace, Shimreingam L. Shimray argues that peace cannot be derived from outside forces but that it must instead be created from within the local context by the local people adopting their own cultural and historical system and using their own intellectual and material resources. The author uses a deeply contextual reading of his own setting, resulting in a work whose value rests in revealing how the tribal people of North East India have used their own resources to work for a culture of peace amidst tension and difficulty.

Negotiating Peace grows from an ongoing commitment on the part of Fortress Press to bring creative theological reflection from the Global South to the conversations taking place around the world. It will be of interest not only to scholars of Christianity in North East India but to scholars, students, and those interested in peace studies.

Shimreingam L. Shimray teaches Christian social ethics and social analysis and is vice principal at the Eastern Theological College, Jorhat, Assam, India. He is a member of Tangkhul tribe of Manipur and is the editor or author of numerous works, among them Tribal Theology: A Reader (2003) and Public Theology: Religion, Human Rights, and Politics (2016).

▼▲
I'm the author/artist and I want to review Negotiating Peace: North East Indian Perspectives on Peace, Justice, and Life in Community.
Back
×