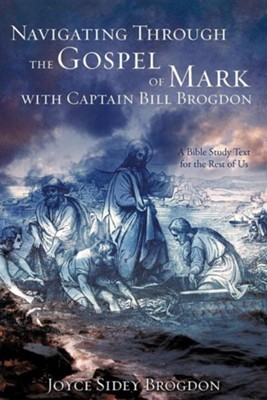 Navigating Through the Gospel of Mark with Captain Bill Brogdon

▼▲
Jesus taught powerful themes by telling stories using everyday commodities as examples and making the unfamiliar come alive for His hearers. His message was for all people, in all social brackets; rich, poor and every class in between. His main thrust was to bring the Gospel (the good news) to the world that all people might have the opportunity to get to know God and learn of His great love for humankind. Through countless ages Mark's Gospel has been held to the light and scrutinized. Mark, through Peter, has faithfully recorded the words of Jesus, the Master teacher. Mark, like Peter, was martyred for his Christian faith. Though scholars continue to help simplify the text, many readers still miss some of the richness of the message because of lack of understanding. Though no one can duplicate Christ's genius, Captain Bill Brogdon attempted to emulate His teaching methods, taking the obscure and difficult and putting it into plain language and using down to earth logic to make it understandable for everybody. In compiling Bill's notes, his wife Joyce, has formulated the text so that it can be read straight through as an interesting story or, following the outline, it can be used as a guide to deeper study of the Gospel according to Mark. Joyce Sidey Brogdon was born in London and grew up in Suffolk, on the east coast of England. She received her bachelor's degree in English from the University of Texas and her master's degree from the University of Southern Maine. Other books by her are, Majuba House (Xulon press, 2003), which is an autobiographic account of growing up in England during WWII, and The Gold Chaser (Borrego Publishing, 2007), which is the story of a remarkable talentedIrishman.

▼▲
I'm the author/artist and I want to review Navigating Through the Gospel of Mark with Captain Bill Brogdon.
Back
×