Skip to main content
SPRING CYBER EVENT STARTS NOW: And it's a really BIG deal! Up to 88% off through 5/24>
Navigating Public Schools: Charting a Course to Protect Your Child's Christian Faith and Worldview
By: Stephen John Williams, Sarah Middleton Williams
Stock No: WW141904 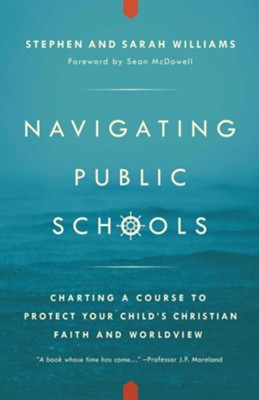 ▼▲
Who Should Read This Book? Navigating Public Schools will empower Christian parents to navigate the increasingly secular public school system with the aim to 1) cultivate strong relationships with their children in a season of immense secular pressure; 2) help their children stand firm in their Christian faith and Biblical worldview; 3) exercise their rights on campus; 4) become salt and light for Jesus Christ. This book will also be a powerful resource for all Christians involved in schools-teachers, administrators, staff, extra-curricular groups, Christian club volunteers, youth leaders, pastors-as they learn to discern the misapplication of the "separation of church and state" and appropriately live out their Christian faith on public school campuses. How Can This Book Help You? For Christians, navigating the public education system is becoming increasingly daunting. Christian parents often feel anxiety about sending their children into the public school environment. Kids spend more waking hours in school than in their homes, and while there, they face many challenges to their faith. The statistics on kids and faith reveal that roughly 50-70% of Christian teens walk away from church when they leave home, and only about 10% come out of the teen years with a Biblical worldview. Navigating Public Schools was not written to debate whether kids should be in public schools or not because the fact is, the majority of Christian kids are in public schools. Navigating Public Schools was written to parents who are hungry for guidance on this journey. As a public school teacher for ten years, Stephen saw firsthand how a child's faith may be eroded, so he desires to equip parents and concerned adults to protect children's faith in schools. This book is perfect for busy parents who want clear tools to navigate curriculum pitfalls, exercise their rights in schools, build a strong worldview foundation as a family, and influence the culture for Christ. This book is meant to help Christian parents be intentional about charting a course to protect their child's faith and Biblical worldview. But it's not only for parents-Navigating Public Schools also equips teachers to step off the fear-induced cultural tightrope and appropriately incorporate Christianity into their curriculum. Christian educators, volunteers, pastors, and anyone who is involved directly or indirectly with public schools will learn to exercise their Constitutionally-protected rights in a respectful way. All Christians who read this book will become more empowered to impact and protect the next generation.

▼▲
Stephen Williams attended the University of California at Berkeley on a swimming scholarship and graduated with a degree in economics. He worked as an economic consultant before pursuing a teaching career. Stephen spent ten years teaching 5th and 6th grade in the Cupertino Union School District in California. Stephen founded Prepare the Way Ministries in 2006, following his involvement in a federal court case concerning the censorship of historical documents with Christian references. His principal and school district censored primary source documents including the Declaration of Independence, William Penn's Frame of Government, and Samuel Adams's The Rights of the Colonists due to their misinterpretation of the "separation of church and state." With the help of the legal firm Alliance Defending Freedom, Stephen filed a federal court case in November of 2004 to protect the freedom of speech and religion in public schools. The case gained national media attention, with TV interviews on Fox News and articles appearing in major newspapers. The case was settled out of court in the summer of 2005 and a written settlement was put in place that allowed primary source documents with Christian references to be used in Cupertino classrooms. Having been on the front lines in the church/state battle, Stephen offers a unique perspective on the ways our culture can erode a Biblical worldview. Stephen speaks nationally on worldview, apologetics, and cultural issues. He currently resides in Bend, Oregon with his family. Sarah Williams completed a Ph.D. in environmental engineering with an emphasis in microbiology from Stanford University. She is the recipient of a National Science Foundation graduate fellowship. Prior to attending Stanford, Sarah graduated from the University of Michigan with a B.S. in engineering. While at the University of Michigan, she was awarded several Hopwood Awards in Poetry and Fiction; following her undergraduate coursework, Sarah was awarded a one-year fellowship to study English at Oxford University. She has published several scientific papers and book chapters in the area of environmental microbiology, as well as poems and stories in several magazines. She is married to Stephen Williams and is the mother of four daughters. She also consults part-time in the area of environmental engineering, enjoys creative writing, and helps with Prepare the Way Ministries. Sean McDowell, Ph.D. is an assistant professor of Apologetics at Biola University. He graduated summa cum laude from from Talbot Theological Seminary with a double master's degree in philosophy and theology. He earned his PH.D. in Apologetics and Worldview Studies from Southern Baptist Theological Seminary. He is the author, co-author, or editor of over fifteen books including Ethix: Being Bold in a Whatever World, Understanding Intelligent Design, the Apologetics Study Bible for Students, Same-Sex Marriage: A Thoughtful Approach to God's Design for Marriage, and Is God Just a Human Invention?. Sean was named Educator of the Year for San Juan Capistrano in 2007-08. His apologetics training has received exemplary status from the Association of Christian Schools International. He is a regular guest on various radio and TV shows. You can read Sean's blog and contact him for speaking events at http://www.seanmcdowell.org. In April 2000, Sean married his high school sweetheart, Stephanie. They have three children, Scottie, Shauna, and Shane and live in San Juan Capistrano, California.

▼▲
"As a public school teacher for ten years, Stephen Williams saw firsthand the challenges facing Christians in public schools, and he desires to equip parents to protect their children's faith and worldview. Weaving the story of the court case he was involved in makes the book intriguing on multiple levels." Josh McDowell Author of More Than a Carpenter "At a time when religious liberty is under attack from all sides, Navigating Public Schools is a much needed resource for parents, students, and teachers in public schools to remind them that they actually have robust Constitutional freedoms at school. Stephen's own story of how he courageously took a stand and victoriously asserted those freedoms in the face of intense opposition should serve as an inspiration for others across our country to do the same." Gary McCaleb, J.D. Regent University Senior Counsel and Executive Vice President, Alliance Defending Freedom (www.ADFlegal.org) "As a superintendent within the public school system, I want to see parents actively engage in the educational journey of their children and to feel they have a voice. Parents will benefit greatly from the guidance contained in Navigating Public Schools. This book provides important information on students' and parents' rights in schools, and also insights about how to properly handle conflict should it arise. As a parent, I also appreciated the encouragement to build a strong faith and worldview foundation at home. Families in the public school system will benefit greatly from owning and reading Navigating Public Schools." Shay Mikalson Public School District Superintendent "Navigating Public Schools is a book whose time is come. It is clearly for such a time as this because, sadly-and many times, unintentionally-public school teachers and curricula are presented in such a way as to explicitly or implicitly undermine a Christian worldview. This book is overflowing with great, practical advice to parents who want to not only protect their children, but to empower them to live and think for Christ. Quite frankly, I cannot think of another book like this, and I highly endorse it." J.P. Moreland, Ph.D. Professor of Philosophy, Biola University Author of Love Your God With All Your Mind "At this time in history when our public schools are often adversarial toward Christianity and intolerant of a Biblical worldview, it is imperative for all Christian educators and parents to read Navigating Public Schools. Stephen and Sarah Williams do a fantastic job of analyzing our public schools, past and present, while emphasizing the importance of not sacrificing our Biblical worldview nor that of our children." Finn Laursen Executive Director, Christian Educators Association International (www.ceai.org) "From the perspective of being teachers and coaches, we see the powerful influences vying for the hearts and minds of our youth. Navigating Public Schools provides critical information for Christians to stand strong in a raging sea of ideas. We must be proactive in teaching our children the defense of their faith, so they will recognize ideology contrary to a Biblical worldview. Stephen and Sarah provide excellent information and resources Christians must know to impact their communities, schools, and homes in both an effective and respectful way." Kent Wieber, Public School Teacher and Coach Heather Wieber, Public School Teacher and Coach

▼▲
I'm the author/artist and I want to review Navigating Public Schools: Charting a Course to Protect Your Child's Christian Faith and Worldview.
Back